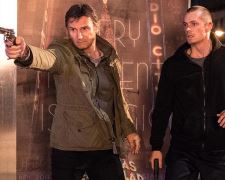 When you’re on a good thing, stick with it.  That would appear to be the current mantra of Oscar-nominated actor Liam Neeson.  In A Walk Among The Tombstones, he was an alcoholic detective trying to hunt down a killer.  In Non-Stop, he was alcoholic air marshal trying to identify a terrorist.  In Taken 3, he was a former CIA operative trying to track down his wife’s killer.  These films haven’t been spread throughout his career.  All have been released in the past 14 months.

Run All Night has been cut from the same mould.  Neeson plays Jimmy Conlon – a retired hitman struggling with alcoholism.  He lives alone, he has few friends, and he has almost no money to his name.  The first time we meet Jimmy, he’s trying to borrow $800 to fix his heater at home.  He’s killed a lot of people (comes with the job I guess) but Jimmy’s biggest regret is that he’s lost touch with Mike (Kinnaman), his only son.  Mike is ashamed of his father’s past and they haven’t spoken to each other in 5 years.

They’re about to reunited… but in very complicated circumstances.  Mike, a self-employed limo driver, witnesses a series of murders while driving one night.  The perpetrator is no ordinary guy.  He’s the son of Shawn Maguire (Harris), a wealthy, powerful, influential mobster.  Shawn intends to use his contacts within the New York City Police Force to frame Mike for the crime so as to protect his own son.

With the stage set, the action can begin.  Jimmy reconnects with Mike and the pair finds themselves running all over the city in an effort to elude not just the authorities, but also Shawn’s numerous hitmen.  There are gun fights, punch-ups, car chases, explosions, and burning buildings.  It’ll tick a lot of boxes for those who are fans of the action genre.

Run All Night marks the third collaboration between Neeson and Spanish-born director Jaume Collet-Serra.  They previously worked together on Unknown and Non-Stop.  The film’s most puzzling element is the way in which it provides a glimpse of the ending at the very start.  It’s a technique that I’m growing tired of.  What purpose does it serve to know that Neeson is going to end up on the ground with a bullet in his chest?  Why lessen the suspense?

There’s nothing particularly subtle or ground breaking about the premise either.  Jimmy Conlon has made a LOT of mistakes in his past and now he’s trying to seek redemption by doing everything in his power to save his son.  You can expect to hear such “insightful” dialogue as “this is between you and me, leave my son out of it.”  It’s a part of the reason why Jimmy is happy to do all the killing (so as not to tarnish his son’s innocence).

The “cat and mouse” action sequences represent the film’s strongest attributes.  There’s a great scene where Jimmy and Mike navigate their way through a large apartment block while trying to escape the police and a ruthless hitman (played by Common).  Neeson will also woo many with his charm (he makes for a worthy good-bad guy) but on the whole, Run All Night is a little underwhelming.