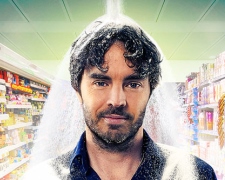 How much sugar is contained in your favourite foods?  Are all types of sugar the same?  What is a reasonable amount of sugar to have in a single day?  What effect does sugar have on your weight, your waist line, and your heart rate?  Which is worse – a high fat diet or a high sugar diet?  All of these questions are answered in the aptly titled That Sugar Film – a documentary from Australian actor Damon Gameau (Balibo).

Gameau opens with the Depeche Mode song “Just Can’t Get Enough” and looks back on a time where he smoked heavily and ate a lot of bad food.  He cleaned up his act after meeting his current partner, Zoe Tuckwell-Smith, in 2009.  Thanks to his improved diet and a quick burst of exercise each day, Gameau is now a model of good health.  He weighs in at 74kgs and has ideal blood pressure.

It wasn’t until he underwent his “transformation” that Gameau realised how much sugar he was consuming and how it was affecting his life.  It’s something that many food and drink production companies would prefer to keep quiet.  Sugar can be just as addictive as tobacco, alcohol and other illicit drugs.  If you want to find out for yourself, try cutting sugar out of your diet for a few weeks and see how your body reacts.

Reminiscent of Morgan Spurlock in the 2004 documentary Super Size Me, Gameau decided to make his point by showing the effects on his own body.  He consumed 40 teaspoons of sugar each day for 2 months.  The catch was that they could only be “hidden” sugars.  Instead of drinking 4 cans of soft drink, Gameau sought out common products from supermarket shelves that contain high levels of sugar.  You’ll be surprised by some of the items he picks.

As you’d expect, the change in diet causes some interesting results.  If it didn’t, this documentary would never have seen the light of day.  The film is about more than just Gameau though.  To watch him eat for 90 minutes might be tedious and so he’s broken it up with a few adventures.  One involves him travelling to an Indigenous community that has banned soft drink.  Another sees him travel to the United States and analyse the level of sugar in their own foods compared to the rest of the world.

That Sugar Film marks Gameau’s directorial debut and it’s an insightful, well-made documentary.  It includes cameos from the lines of Stephen Fry, Hugh Jackman and Brenton Thwaites who clearly have an interest in the topic.  It also features some cool special effects which help make the subject clearer and more appealing (especially to younger audiences).  A concluding musical number, complete with song and dance, is really fun too.

We don’t see too many Australian documentaries get a substantial release in this country and so hopefully That Sugar Film finds an audience and gets its message out there.  I know I’ll be looking at food packaging labels a little more closely from now on.