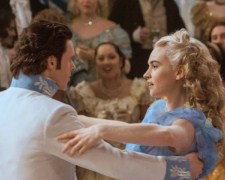 Director Kenneth Branagh (Hamlet, Thor) has taken a different approach to Cinderella.  Instead of altering and remodelling this famous classic tale, he’s providing us with a very traditional version.  There are no unexpected twists, no major surprises and certainly no vampires.

It’s a much beloved story but it wasn’t until I saw Branagh’s version that I realised that the premise is somewhat “out dated”.  Poor Cinderella must slave after her villainous step mother and two step sisters following the death of her father.  That is until she meets a young, handsome prince at a lavish ball.  She can then live out the dream that apparently every girl wants – to marry into royalty and to live happily ever after.

I’m a huge fan of Jane Austen’s and the same question could be asked of her works from the early 19th Century.  Austen’s central characters were often women who wanted to find a wealthy, loving husband.  When she won an Oscar for adapting Sense & Sensibility, writer Emma Thompson jokingly thanked producer Sydney Pollock “for asking all the right questions like why couldn’t these women go out and get a job?”

The catch with Austen’s work is that this was representative of the times in which she lived.  Women didn’t work.  Women weren’t independent.  They simply came “of age” and then valiantly tried to find a suitor so as not to become a bitter, childless spinster.  The difference with Cinderella is that it’s a simple fairy tale not pinned to a point in history.

To digress further, while it wasn’t particularly well executed, part of the reason I liked Into The Woods is because it threw out the fairy tale textbook.  Instead of living happily ever after, Cinderella found out that the prince was a self-absorbed, cheating scumbag.

What then is the moral of Cinderella?  Is it just a comforting story that makes us believe in good things happening to good people?  What then of the fairy godmother?  Is it trying to show us that there is a higher power that will guide us when the time is right?  Do Cinderella’s good looks come into the equation?  Did everything work out because of her stylish glass slippers and long, beautiful blonde hair?

Before I get too far off track, I should say that yes, I liked this movie.  It’s colourfully shot, has some great dialogue, and its themes come through loud and clear.  I’d argue it’s targeted at kids but there’s enough here for most audiences to appreciate.  Credit also belongs with writer Chris Weitz, the Oscar nominated screenwriter of About A Boy.

Above all else, the best reason I can give to see this film is Cate Blanchett.  She’s incredibly good as the evil stepmother.  She delivers her ruthless barbs with precision… but you also get a strong sense of her character’s deep seeded insecurities.  Many won’t be familiar with the name but Lily James also impresses in the title role and will be a name to watch going forward.

While I would have preferred this story to be adapted to a current day setting, Cinderella will still provide enchantment for younger crowds over the upcoming school holidays.