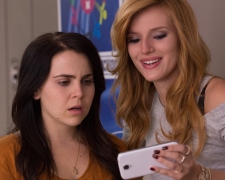 It’s official.  I am out of touch with the youth of today.  Up until I saw the trailer for this film a few weeks ago, I was unfamiliar with the term DUFF.  It stands for “designated ugly fat friend” and apparently such folk are valuable to those of us who are fit, attractive and skinny.  The reasons are hard to explain without sounding like a complete schmuck.

The film is centred around a high school student named Bianca Piper (Whitman) who is told by her attractive next door neighbour, Wesley (Amell), that she’s a DUFF.  Bianca shrugs him off at first but the more she thinks about it, the more it makes sense.  So many people talk to her… but it’s only because they want to get more information about her two best friends (who just so happen to be very attractive).

We’ve seen these female-centric make-over movies many times before.  Think The Princess Diaries, She’s All That, Clueless, Mean Girls, Pretty Woman, Grease, My Big Fat Greek Wedding, The Devil Wears Prada and Miss Congeniality.  The irony of these films is that while they are putting forward a positive message, the actors themselves would never have trouble getting a date in real life.  They’re only made to look “unattractive” thanks to the help of the costume designers and make-up artists.

The same applies in The DUFF.  26-year-old Mae Whitman has already put together a comprehensive resume that includes roles in Arrested Development, Scott Pilgrim Vs. The World, and The Perks Of Being A Wallflower.  She’s a smart, pretty, pimple-free young woman who director Ari Sandel has turned into a “designated ugly fat friend” by giving her daggy clothes, a dull hairstyle, and a lifeless facial expression.

The premise of the film won’t come as a surprise to anyone.  Bianca and Wesley make a pact.  She’ll help him lift his grades so that he won’t lose his spot as the star captain of the football team.  He’ll help her lift her social standing by giving her confidence… and an improved wardrobe.  The end goal is Toby – a blond-haired, music-playing boy that Bianca has had a crush on for years.

The DUFF has most of the trademarks that you’d expect with a film like this.  There’s the school’s stuck-up, pretentious cheerleader-type who is devoted to becoming queen at the homecoming dance.  There’s also a group of humorous teachers who are quick to dispense advice.

Just when you think the film might take a chance with something new, it falls back and takes the soft option.  The best example is a sequence where Bianca is presented with a choice of two great guys.  What could be a very difficult choice… turns out to be a very easy one thanks to a convenient plot device.

That’s not to say that the film isn’t entertaining.  Yes, it uses a well-worn textbook but thanks to some quality casting and a likeable screenplay from writer Josh Cagan, there are still plenty of laughs.  Mae Whitman goes a solid job selling her clichéd character.  The older actors, which include Ken Jeong and Allison Janney, chime in with some goofy comic relief.

While The DUFF isn’t as fresh as other teen-orientated films such as Mean Girls and Easy A, it’s still a fun way of spending two hours.