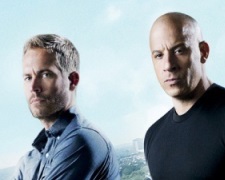 It’s been one of the most successful movie franchises of all time but there’s a tinge of sadness that envelops Fast & Furious 7.  It marks the final movie of Paul Walker who was killed in a car accident in November 2013.  Only half of Walker’s scenes had been completed and so required extensive changes to the script by writer Chris Morgan.

These changes are evident.  Walker’s character spends more time in the background than in the previous films.  It therefore falls upon Vin Diesel to do the heavy lifting (and heavy fighting) as the sole central character.  The movie finishes on a nice note though.  There’s a touching tribute to Walker which encapsulates his work since the series began back in 2001.

There’s nothing particularly new about the storyline.   In Fast & Furious 6, our heroes travelled to London and killed a bad guy who was trying to build a weapon of mass destruction for not-so-nice reasons.  This time around, we’ve got the brother of that bad guy who seeks vengeance.  His name is Deckard Shaw (Statham) and he's a former assassin within the British Special Forces.

The other key plotline revolves around a ridiculously powerful device that allows the user to hack any computer system in the world.  It’s a known as “God’s Eye” and there’s a dangerous terrorist (Hounsou) looking to get his hands on it.  Dominic Toretto (that’s Vin Diesel) is asked to help locate the device and in return, he can use it against Shaw.

This is definitely one of the better films in the franchise.  Statham makes for a great villain and this should come as no surprise given his presence in action films such as The Transporter and Crank.  Kurt Russell also makes a nice addition as a relaxed, no-nonsense special agent who likes to go by the appropriate nickname of Mr. Nobody.

Perhaps the film’s strongest attribute is its direction.  Australian James Wan (Saw, The Conjuring) has replaced Justin Lin (who made the last 4 movies) and has brought a strong style with him.  Wan has found some great camera angles to use when shooting the action sequences.  This includes everything from helicopter flyovers to cameras rolling over in sync with the characters.  It all looks very good.

The action sequences are ridiculously over-the-top… but they’re done in a semi-comedic way that is still entertaining.  There are cars flipping over and crashing into things.  That’s not new.  However, we’ve got cars plummeting down mountains, parachuting off planes, and even driving atop a penthouse in Abu Dhabi.  Now that is new!  The casting can’t be overlooked either.  It’s a series that has prided itself in finding muscular men and beautiful women.

Drumming home its familiar themes of loyalty and family, Fast & Furious 7 should reel in truckloads at the box-office and this will undoubtedly set the stage for the next instalment.