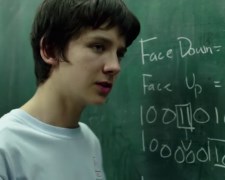 In 2007, director Morgan Matthews put together a documentary that followed a group of British high school students preparing themselves for the International Mathematical Olympiad.  Entitled Beautiful Young Minds, the film highlighted that while these kids were brilliant at maths, some displayed signs of autism that made it difficult for them to connect with their parents and their regular classmates.

Matthews earned a BAFTA nomination for its efforts and it’s clearly a subject matter that he’s drawn to.  The aptly titled X+Y is a fictionalised version of the same story.  When we first meet Nathan (Butterfield), we see he’s a shy, introverted kid with a rather unusual thought process.  When his mother (Hawkins) goes to the local Chinese restaurant to pick up a take-away dinner, she has to specifically request seven prawn balls.  That’s because Nathan won’t be happy unless he’s eating a prime number.

Doctors have confirmed that Nathan is showing “traits of autism combined with synaesthesia to a change in light and pattern.”  He’s brilliant when it comes to maths but he struggles when it comes to social interaction.  One person who seems to understand is Martin (Spall) – a middle-aged high school teacher who competed in the International Mathematical Olympiad himself as a teenager.  He’s agreed to take Nathan under his wing and set him on a path to success.

Selected as part of a British squad, Nathan travels to Taiwan with a number of other gifted maths students to help train for the upcoming Olympiad.  It’s his first trip away from home and while he’s a little hesitant at first, Nathan slowly starts to come out of his shell as he meets others with similar interests and similar obstacles.  He is paired up in the pre-competition trials with a Chinese girl (Yang) and the two become quite close.

We don’t see a lot of films that deal with the subject of autism and so X+Y is important in that regard.  Thanks to a great leading performance from Asa Butterfield, we’re able to get inside Nathan’s head and understand what he’s thinking.  Butterfield is a terrific young actor on the rise having starred in The Boy In Striped Pyjamas, Hugo and Ender’s Game.  Matthews also does a great job illustrating Nathan’s view of the world through the use of colour and flashbacks.

There are several subplots within the main narrative and screenwriter James Graham struggles to devote enough time to each.  Jake Davies plays Luke – a kid who is part of the British Olympiad squad but who is ostracised by others in the group because of his severe autism.  He’s an intriguing character but the screenplay is very unsympathetic towards his condition (evidenced by the way he slips out of view in the later stages).

Another individual we don’t really get to know in enough depth is Nathan’s teacher.  Battling the early stages of multiple sclerosis, Martin has difficulty walking and is developing an addiction to prescription medication.  He’s lonely, depressed, and too afraid to reach out for help.  The film tries to construct a relationship between Martin and Nathan’s mother to help remedy his problems but it feels a little too simplistic.

As we saw with last week’s The DUFF, there’s a strong audience for teen-orientated comedies that provide a lighter look at the issues facing today’s teenagers.  X+Y is to be praised for offering something more dramatic, more realistic.  While the script stumbles a few times along the way, the film will be a valuable eye-opener for those new to the world of autism.