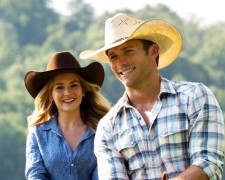 While I’ve enjoyed some Nicholas Sparks adaptations, the majority have been a too clichéd and schmaltzy for my tastes.  The last three films have been particularly poor – The Lucky One, Safe Haven and The Best Of Me.  With The Longest Ride boasting a running time of 139 minutes, you can see why I wasn’t rushing into the cinema with high expectations.

The early scenes didn’t do much to change those preconceptions.  Sophia (Robertson) is an art history student in her final year at college in North Carolina.  She’d rather be hitting the books but her good friend has convinced her to attend a rodeo competition by promising “the hottest guys you’ve ever seen.”  It’s therefore no surprise that she meets a well-groomed cowboy named Luke (Eastwood) who jumps off a bull and offers his black cowboy hat.

Luke is a sweet, old-fashioned guy.  He’s the one who asks her out, he’s the one who buys her drinks, and he’s the one who turns up on her doorstep with a bunch of flowers for their first date.  There’s a clear connection between the pair but Sophia is hesitant.  She’s accepted an internship at an art gallery and will be moving to New York in less than two months.  The last thing she’s looking for is a relationship.

It may sound like an up-and-down, seen-it-all-before romance but there’s an additional storyline that is far more interesting.  Driving home one night, they come across the scene of a car accident and rescue an old man named Ira (Alda) from his burning vehicle.  Sophia is also able to save a small basket on the front seat which was packed with old letters.

Over the next few weeks, Ira and Sophia become good friends.  It turns out the letters were written by his wife back in the 1940s but Ira hadn’t been able to read them in years due to his failing eyesight.  Sophia helps him out and in the process, we are treated to flashbacks of the younger Ira (Huston) and the time he met the love of his life, Ruth (Chaplin).

It’s the sentimentality of this second storyline that won me over.  Ira, realising that he doesn’t have long left to live, is sharing his life’s story for the final time.  It includes a moving subplot where Ira is injured while fighting in World War II and rendered impotent.  The dreams they had a big family are now not possible.  As Ira tells these tales, Sophia soaks it all in and tries to apply the learnings to her relationship with Luke.

The film still comes with the cheesy trademarks that you’d expect with a romantic drama such as this.  There’s a moment where Sophia accidentally falls into a small lake at Luke’s farm house.  They go inside, she removes her wet clothes, their eyes lock, he takes off his shirt, and, well, I think you know what happens next.  There were a mix of laughs and groans coming from the audience.

Unlike other Nicholas Sparks adaptations, The Longest Ride features a largely unknown cast.  That said, two of the actors come with interesting backstories.  The first is Scott Eastwood, the 29-year-old son of Clint Eastwood.  The second is Oona Chaplin, the 28-year-old granddaughter of Charlie Chaplin.  It’ll be interesting to see where their careers head over the next few years.

It’s too long, the rodeo scenes are repetitive, and the ending doesn’t really stack up… but The Longest Ride will warm the hearts of many with its honourable characters and fairy tale romance.