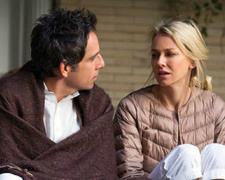 How old are you friends?  I’m not talking about your family but rather the people you hang out with socially on a regular basis.  Are they younger, older or the same age?  Is there any particular reason why?  These questions are contemplate by writer-director Noah Baumbach (The Squid And The Whale, Frances Ha) is his latest effort, While We’re Young.

Josh (Stiller) and Cornelia (Watts) are a married couple with similar interests.  He’s a documentary filmmaker trying to finish his latest pet project.  She’s a film producer who works for her successful father.  Their lives haven’t changed much over the past decade.  They never had kids (Cornelia had several miscarriages) and they’re still career-focused people trying to find success in a tough industry.

What has changed are the lives of their close friends.  They’ve become more family based and so they talk about their own children constantly.  There’s a humorous scene where one of them drags Cornelia along to a Wiggles-like concert in an effort to catch up.  She couldn’t be more uncomfortable and so she flees the venue before it’s all over.

Josh and Cornelia find their friendship group shift when they latch onto a couple in the mid-20s.  The Oxford Dictionary defines “hipsters” as those who “follow the latest trends and fashions, especially those regarded as being outside the cultural mainstream.”  That pretty much sums them up.  Jamie (Driver) is a film student trying to put together a documentary that highlights our over reliance on Facebook.  Darby (Seyfried) attends hip-hop classes and is being guided by a shaman in search of spiritual awakening.

A few of the jokes in While We’re Young aren’t particularly adventurous.  There’s a part where Josh goes bike riding with Jamie only to injure his knee.  It’s a simple reminder of his “old age” which is further confirmed by his doctor who tells him that he’s suffering from arthritis.  I also wasn’t convinced by Jamie and his Facebook doco.  He’s just a little too goofy.

That’s not to say the film doesn’t have something to say.  There are some great conversations between Josh and Cornelia as they start analysing their lives.  Is their friendship with Jamie and Darby just a quick, passing fad?  Or is helping them realise who they are and what they’re looking for in life?  It reminds me a little of Woody Allen in that it’s using comedy to make insightful comments about relationships and society.

Considering this week’s other major comedy release is Paul Blart: Mall Cop 2 (not previewed for critics), I should be grateful for While We’re Young.  It’s far from perfect but it will leave you with a lot more to reflect upon.