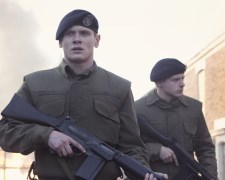 A lot of great movies have covered the late 20th Century conflict in Northern Ireland that is widely regarded as “The Troubles”.  The list includes The Crying Game, In The Name Of The Father, Bloody Sunday and Hunger.  The latest entry is the oddly titled ’71.

Directed by first-timer Yann Demange, the film focuses its attention on a young, inexperienced British solider named Gary Hook – played by rising star Jack O’Connell who also had the lead role in Angelina Jolie’s Unbroken.  Hook recently joined the British Army and has been sent to Belfast to help deal with the growing unrest between the Catholic Nationalists and Protestant Loyalists.

It’s a volatile situation that is escalating further out of control.  Hook and his fellow soldiers have been ordered to search all homes in a Catholic neighbourhood and look for illegal weapons.  They may think they’re helping… but their rough approach is only further upsetting the radical sections of the population who see the military as doing the government’s dirty work.

When a protest involving the Catholic Nationalists turns violent, those commanding the British Army make the decision to retreat.  Unfortunately, an injured Hook is left behind in the mayhem and he takes refuge in a small outhouse to avoid being captured.  He’s about to become the key piece in a critical game.  Some want him dead.  Some want him alive.  Trapped in a city he doesn’t know, Hook must somehow find a way home.

Part historical drama and part action thriller, ’71 makes for gripping viewing.  The story of Gary Hook is fictional but the time and setting is realistic.  Writer Gregory Burke highlights the complexity of the situation by showing the many parties that were involved in the conflict.  It’s hard for Hook to work out who to trust.  We’re also treated to some suspenseful chase sequences where Hook must outrun his enemies down narrow laneways and through multi-storey apartment buildings.

Yann Demange had doubts when he first head of the project.  Given the power of both Bloody Sunday and Hunger, he wasn’t sure if he could make something of equal brilliance.  That changed when he read the script and realised it contained a few intriguing twists and turns.  Demange also had to change the timing of the shoot so as to secure the service of Jack O’Connell (who had just finished another film).  I can’t fault his decision because O’Connell’s passionate performance is to be admired.

’71 is receiving a very small release here in Australia but it’s not to be ignored.  It was nominated for best British film at this year’s BAFTAs alongside the likes of The Imitation Game, The Theory Of Everything and Pride.  That’s a strong and worthy endorsement.