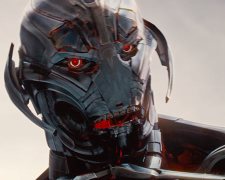 It’s becoming a struggle to keep up with all the characters in the Marvel universe.  Over the past decade, we’ve had 23 Marvel related films centred on the likes of Spider-Man, Iron Man, Thor, Captain America, The Incredible Hulk, the X-Men, the Fantastic Four, and the Guardians of the Galaxy.  When you throw the likes of Superman and Batman from the DC Comics franchise, it’s never been clearer that we’re living in the age of the superhero movie.

Given that our beloved heroes have been so busy and so successful, it seems that there aren’t any more bad guys left to kill.  There’s no time to rest up however.  In this latest Avengers flick, they’ve actually created their own villain to defeat!

We can largely blame Iron Man (Downey Jr).  I wouldn’t describe him as a communist… but he’s certainly not a fan of democracies.  Without consideration or consultation, Iron Man has taken it upon himself to create a single robot that will have the power to protect the entire planet.  It will make all other superheroes obsolete.  He can then retire and enjoy his superannuation.

Lo and behold, it all goes pear shaped.  The robot, known as Ultron (voiced by James Spader), has some not-so-friendly qualities.  He’s particularly keen on obliterating the human race and has enlisted two siblings from Eastern Europe to help him out – Pietro (Johnson) who can move with ridiculous speed and Wanda (Olsen) who can tap into people’s minds and predict their future.

The good news for Iron Man is that won’t have to face the International Criminal Court despite his insanely negligent actions.  His colleagues spend a few minutes venting their frustrations but they’re generally happy to forgive and forget (yeah, I surprised too).  Iron Man, Captain America, Thor, The Hulk, Black Widow and Hawkeye realise they’re going to have to work as a team if they’re any chance of defeating Ultron.

Avengers: Age Of Ultron takes a long time to establish the above premise and to reintroduce its heroes.  I’m still not 100% sure about the technology used to create Ultron and why he has such a disturbed personality.  Writer-director Joss Whedon has compared Ultron to Frankenstein in the sense that he’s a man-made creation who then turns against his master.  It’s a curious analogy that doesn’t come through as clearly as you might expect in the film.  I can think of other Marvel villains that are more interesting (e.g. Tom Hiddleston as Loki and Guy Pearce as Aldrich Killian).

With such an enormous cast, character development is also limited.  There are glimpses of intrigue such as The Hulk’s struggles to control his ability.  You could strongly argue that he’s suffering from depression.  There’s also chatter amongst our heroes about succession planning.  Is it time for them to pass the torch onto the next generation?

These character-driven elements are largely overshadowed by the film’s elaborate, special-effects laden action scenes.  The body count is kept to a minimum and we are treated to an array of brave rescues and narrow escapes.  We’ve seen this stuff before but Whedon does bring a creative touch.  The final sequence is “ground breaking” and I’m speaking both physically and metaphorically.

The first Avengers flick reaped in more than $1.5 billion at the worldwide box-office.  It’s hard to imagine that number being eclipsed but given the passion of Marvel’s loyal fans, nothing would surprise me.