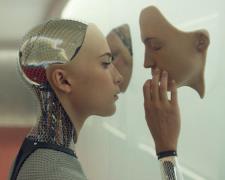 The opening scene in Ex Machina is reminiscent of Roald Dahl’s Charlie & The Chocolate Factory.  A young computer programmer named Caleb (Gleeson) works for a huge technology company similar to Google.  He is the sole winner of a lucrative office lottery that will give him the chance to meet the company’s CEO, Nathan Bateman (Isaac).

It’s actually a bigger deal than you may think.  Nathan may be ridiculously wealthy and incredibly powerful… but he is also a recluse.  He is seldom seen in public and his home, which also serves as his research facility, is hidden at the bottom of an expansive mountain range (which he just so happens to own).

As most would be in the same situation, Caleb is both nervous and intrigued when they first meet.  What questions do you ask someone who is a proven genius?  At the same time, he’s curious as to why Nathan lives such a secretive life and what projects he’s been working on.  Caleb’s inquisitive nature is further heightened when Nathan asks him to sign a complex non-disclosure agreement.

It’s not long before Nathan spills the beans and reveals that he’s created a robot with artificial intelligence.  Over the course of the next week, he asks that Caleb interact with the robot, known as Ava (Vikander), and see if it passes the “Turing test”.  Named after the acclaimed computer scientist Alan Turing (see The Imitation Game), the test is passed if the robot’s actions cannot be distinguished from those of a human.

With the stage set, Ex Machina takes on the elements of an uncomfortable thriller.  Caleb develops an attachment to the robot but the whole situation leaves him hesitant.  Why is Ava trying so hard to win his affections?  Is it because she can think for herself and likes him as a person?  Or has she simply been programmed to match his preferred personality traits?  Who is the one being tested here – Ava or Nathan?

The film marks the directorial debut of Englishman Alex Garland.  He’s no stranger to the industry though having forged a successful career as a writer.  His credits include The Beach (he also wrote the novel), 28 Days Later, Sunshine and Never Let Me Go.  Ex Machina is a challenging project that most budding filmmakers would love to sink their teeth into.  It’s like many low-budget horror films in the sense that you have to hook the audience using a small cast and a single location.

I like the approach, I like the style, and I like the message the film is trying to impart.  It’s more than just a mystery.  Garland does have a something to say.  Unfortunately, the screenplay feels too manufactured in its efforts to reach the aforementioned conclusion.  Things fit together too neatly and characters act in a way that belies their intelligence.  The more you think about it, the less sense it makes.

Swedish born Alicia Vikander delivers the film’s standout performance as the robot Ava.  It’s as if she’s running her own “Turing test” on the audience and trying to make you sympathise with her character.  Having made a name for herself in historical dramas such as A Royal Affair, Anna Karenina and Testament Of Youth, it’s great to see Vikander expanding her resume and dipping her toes into the science fiction genre.