Review: A Royal Night Out 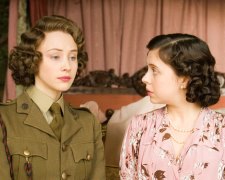 After days of speculation, Prime Minister Winston Churchill took to the airwaves on 7 May 1945 and announced the end of World War II in Europe.  He declared that the following day would be a national holiday and would be known as Victory in Europe Day.  Huge crowds took to the streets of London to celebrate and amongst them were the two heirs to the British throne – Princesses Elizabeth and Margaret.

Not a lot is known about the future Queen’s actions on that night.  Her official diary summed it up in just 24 words – “PM announced unconditional surrender.  Sixteen of us went out in the crowd, cheered parents up on the balcony.  Up St J’s, Piccadilly, great fun.”  With little factual information to guide them, writers Kevin Hood (Becoming Jane) and Trevor De Silva have crafted a fictional tale that follows Elizabeth and Margaret as they escape their parents’ tight clutches and have, as the title promises, a royal night out.

This is a light, feel good comedy and it’s obvious from the early scenes that it’s not intended to be a historical drama.  The King and Queen have concerns about letting their daughters leave Buckingham Palace and so the Queen quietly organises for them to be chaperoned by two upstanding British soldiers.  In a sequence resembling a Benny Hill skit, the soldiers meet a group of women, head upstairs for a quick “rendezvous”, and lose contact with the two princesses.

The film isn’t afraid to poke fun at the royal family either.  Margaret (Powley) comes off as the cheeky, promiscuous one who doesn’t mind a few drinks.  There’s one scene where she unknowingly ends up in a brothel!  Elizabeth (Gadon) is more responsible but she has no idea about life outside of the palace.  She doesn’t have money to pay for a bus fare.  She’s doesn’t know how to find the bathrooms in a pub.

Two other subplots receive a fair chunk of screen time.  The first involves the King and Queen – played by the experienced Rupert Everett and Emily Watson.  The King is drafting a speech to the nation and is stressing about how it will be received.  The second involves Jack (Reynor) – a soldier who has gone AWOL and is thinking about fleeing to the United States.  He meets Elizabeth on the aforementioned bus and it’s here where the writers offer a splash of romance.

It’s a crowd pleaser but I didn’t think much of A Royal Night Out.  The comedic moments are too far-fetched and most characters come across as bumbling fools.  The on-again, off-again friendship between Elizabeth and Jack also gets tired quickly.  They fight, they split, they bump into each other, and the process keeps repeating.  They’re not very good at professing their feelings either.  There’s a moment on a boat where the dialogue feels particularly stuffy and scripted.

With the light tone and jazzy music, the more serious elements involving the insecure King and the fussing Queen seem out of place.  There’s an odd scene where Rupert Everett looks out of a palace window and laments that “things are getting out of hand”.  What exactly was he expecting?  Could his people not celebrate after such a brutal war?  Colin Firth gave the character much more depth with his Oscar winning performance in The King’s Speech.

Director Julian Jarrold (Kinky Boots) makes great use of landmarks such as Trafalgar Square to help recreate the era.  Archival footage is also used to nice effect before the opening titles.  Unfortunately, the strong production values are not enough to save what is a muddled, forgettable comedy.