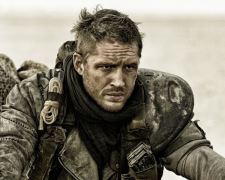 I usually take notes when I’m reviewing a film.  I try to jot down details about the characters, information about the plot, and a few memorable quotes.  Thirty minutes into Mad Max: Fury Road, I looked down at my notebook and realised that I hadn’t written a thing.  This wasn’t because the film was terrible.  It was because it’s a film that most of its work through visuals as opposed to spoken words.

The story is set in a futuristic, apocalyptic-type world where the two most important commodities are water and oil.  Both can be found at the Citadel but its residents are deprived access by the town’s ruling dictator, Immortan Joe (Keays-Byrne).  He’s a hideous, repulsive individual who treats women in a shocking fashion.

The original Mad Max, released more than 35 years ago, has become one of Australia’s most well-known films.  Writer-director George Miller could have fallen in to the trap of making a safe, unadventurous remake but instead, he takes a chance and shifts the focus onto its female characters.

The film begins with Imperator Furiosa (Theron) rescuing a group of abused women from Citadel and fleeing in a huge, purpose-built oil truck.  Joined by a nameless man (Hardy), they head across the desert and go in search of the “green” lands that can offer water, protection and freedom.  They are pursued by Immortan Joe and his army of soldiers who won’t go down without a fight.

The general formula with a Hollywood-style action movie is to include 3-4 keynote battle scenes and then use the gaps in between to develop the characters and flesh out the story.  That’s not the case here.  Miller begins with a well-choreographed chase sequence that never really stops.  Except for a handful of very short detours, this is two hours of unrelenting warfare.  In fact, I don’t think I’ve ever seen an action film with less dialogue.

It may sound tiresome but the reality is anything but.  Many action flicks are over-edited to the point where you’re not sure what’s going on and who’s fighting who.  Using a seamless mix of stunts and special effects, Miller has crafted some brilliant scenes that look like they were shot in a single take (using about 50 cameras of course).  It’s intense… but it’s also easy to follow.

Mad Max: Fury Road was to be shot in Broken Hill back in 2011 but flooding rains ruined the desert-like landscape and so the production had to be shifted to Namibia on the west coast of Africa.  It turned out to be an amazing location that is exploited to its full potential by Queensland-born cinematographer John Seale (Rainman, The English Patient).   Also deserving credit is Dutch composer Junkie XL for his strong but not-over-the-top film score.

Plans are afoot for further sequels but whether they progress will depend on the box-office success of Fury Road.  As one of the more creative action films that we’ve seen in recent years, I’m hoping the word of mouth spreads widely and quickly.