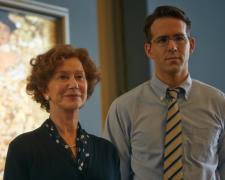 In George Clooney’s The Monuments Men, released early last year, a group of American soldiers were prepared to risk their lives so as to recover famous works of art that had been stolen by the Nazis during World War II.  It wasn’t the greatest of films… but it said something about the value we place on historical art in today’s society.  Roughly 10 million people flock to the Lourve Museum in Paris each year so as to get a small glimpse into the past.

Woman In Gold taps into similar themes in telling the true story of Maria Altmann (played in the film by Helen Mirren).  Altmann was born in Austria and raised of wealthy Jewish parents but was forced to flee the country after the Germans took control in 1938.  She eventually settled in the United States where she lived with her husband and operated a small clothing business.

In the late 1990s, the Austrian government passed legislation that allowed art works stolen during the Nazi occupation to be returned to their rightful owners.  Altmann, now in her early 80s, saw it as opportunity to reclaim a portrait of her aunt that had been painted by the acclaimed Gustav Klimt and taken by the Nazis from her home in Vienna. Her reasons were twofold.  Firstly, she wanted to use the painting to keep alive the memory of her beloved aunt (who passed away when Altmann was only a child).  Secondly, she wanted justice.

Helping Altmann was a budding lawyer based in Los Angeles named Randol Schoenberg.  Played by Ryan Reynolds, Schoenberg is from the textbook of young movie lawyers.  He’s struggling to find work, he’s in need of cash, and he’s horribly inexperienced.  When asked by Altmann what he knows about art restitution, Schoenberg’s answer is “not a thing.”

He’s only taken the case because he can see huge dollar signs at the finish line.  A quick internet search shows Schoenberg that Klimt’s painting, known as Portrait of Adele Bloch-Bauer I, is housed at the Belvedere Palace in Vienna and is valued in excess of $100 million.  A journalist (Bruhl) describes it to him as “the Mona Lisa of Austria”.

Suffice to say that the Austrian government aren’t going to hand it over without a fight.  It turns out the art restitution legislation was just a “PR exercise” and they’re going use their own high-profile lawyers to thwart Altmann’s efforts and ensure the painting remains in Austrian hands.

Directed by Englishman Simon Curtis (My Week With Marilyn), Woman In Gold is a film of two halves.  The first hour provides context through lengthy flashbacks.  We are introduced to the younger Altmann, view her life in Vienna, and understand why she is so attached to her aunt’s portrait.  The second hour follows her current day legal dramas and involves a trip to the United States Supreme Court.

Like last week’s A Royal Night Out, the film is framed as a crowd pleaser.  Mirren portrays Altmann as both stubborn and demanding… but in a way that audiences will still find funny and endearing (her age helps).  Unfortunately, the screenplay doesn’t ask tough enough questions of her character.  Her “revenge against the Nazis” mantra can only stretch so far.  Was she ever motivated by money?  Why did she not seek other, not-so-valuable paintings that were stolen?  Did she ever consider the importance of the portrait to the current day population of Austria?

On the whole, it’s an interesting premise but many of the subplots are rushed.  Schoenberg is the most troublesome character in this regard.  There’s a moment where he continues legal action despite the wishes of Altmann.  Was he still driven by a lucrative commission at that point?  Or had his trip to Vienna flipped his moral position?  I had no idea.  His unassisted progression through the courts was also tough to believe.

The film’s 1930s narrative resonates much more strongly.  It’s hard not to feel sympathy for the younger Altmann as she makes the difficult decision to flee Austria.  There’s a particularly moving scene where she says good-bye to her parents for the final time.  If only the rest of the movie felt this authentic.