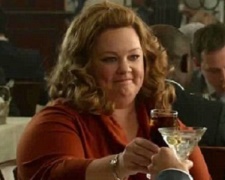 This latest comedy from director Paul Feig (Bridesmaids, The Heat) starts out like a James Bond spoof.  We are introduced to Bradley Fine (Law) – a cool, suave, well-dressed CIA operative who has infiltrated a lavish party and is looking for the bad guy to apprehend.  The film even comes with a Bond-like opening title sequence.

Fine isn’t the focus though.  While he’s out shooting villains and seducing women, there’s someone behind the scenes who is a huge part of his success.  Her name is Susan Cooper (McCarthy) and she sits at a small desk at CIA headquarters.  She does his research, she tells him where the bad guys are located, and she even picks up his dry cleaning.

Cooper has a huge crush on Fine and is content to live in his shadow… but it’s not quite the career she envisioned.  She’s always wanted to get out in the field and become a “full on” spy herself.  Thankfully, opportunity is about to come knocking.  When a mole reveals the identity of all current agents, CIA chief Elaine Crocker (Janney) is forced to go with a compete unknown for the latest assignment.

Cooper’s job should be a simple one.  She is to head to Paris and monitor the activities of Rayna Boyanov (Byrne), a villainous Bulgarian who is rumoured to be selling nuclear weapons to terrorist organisations.  Cooper is ordered to keep her distance and observe Boyanov from afar but that’s not how the situation will play out.  She wants to prove to everyone that she’s a top class spy and so she takes matters into own hands… with hilarious consequences.

Paul Feig already has two terrific female-centric comedies to his name – Bridesmaids and The Heat.  Spy is similarly impressive but he deserves twice as much credit this time around since he serves as both director and writer.  It’s a screenplay choc-filled with insults.  It’s as if every character is doing their best to degrade others.  Cooper even does it to herself.  Asked to wear a disguise, she describes her look as being “like someone’s homophobic aunt”.

It’s the terrific characters that elevate this above your average comedy.  Jason Statham (Fast & Furious 7) plays Rick Ford – an arrogant, self-centred CIA agent who keeps popping up at every location and trying to steal Cooper’s thunder.  Australian Rose Byrne (Bad Neighbours) is a refreshingly unorthodox villain and earns plenty of laughs from her fashion commentary and her pompous attitude.  Melissa McCarthy again proves that she can be one of the funniest actors in the business when given a well-written script (i.e. something that isn’t Tammy or Identify Thief).

Feig isn’t afraid to throw in a few “what the f***” moments either.  For example, there’s a bizarre yet amusing moment where the CIA offices are overrun with bats.  He’s also crafted a sufficiently interesting screenplay.  Yes, it’s a far-fetched comedy but you’ll still be invested in the characters and curious to see how they fare in the film’s finale (which itself includes a “what the f***” cameo).

Some pay be perturbed by its crudeness but Spy is the best mainstream comedy we’ve seen so far in 2015.