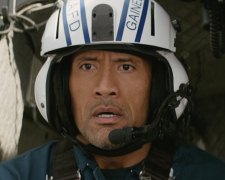 In June last year, I received a letter in the mail advising that my home street in the Brisbane CBD would be closed so that Warner Bros. could shoot scenes for a new earthquake movie starring Dwayne Johnson.  It was a cool event… but it also highlighted the wonders of visual effects.  A movie set in Los Angeles and San Francisco (which you’ll see very clearly in the film) was shot on the opposite side of the world.

Alas, I didn’t get to meet Dwayne.  There’s probably not much I could have asked given this is a generic action blockbuster.  He stars as Ray – a Los Angeles based fire fighter who is practically a superhero.  In the film’s opening scene, we see him flying a helicopter and rescuing a woman who is trapped in her car which hangs precariously on a cliff face.  It’s all captured on video too by a journalist profiling Ray for a news story.

Unfortunately, his family life isn’t quite as successful.  His wife, Emma (Gugino), has just issued him with divorce papers because she’s decided to tie the knot with a billionaire real estate developer (Gruffudd).  Caught in the middle is their teenage daughter, Blake (Daddario).  I’m not quite sure what Ray did wrong to warrant the divorce… but it can’t have been too bad because he’s a nice guy and he seems to have taken it all in his stride.

With that limited character development out of the way, it’s time to cue the earthquakes.  A sizeable quake strikes Nevada and obliterates the Hoover Dam.  It’s just the start however of a series of quakes along the San Andreas Fault that will leave historians (well, those who survive anyway) searching through the record books.  The level of destruction rivals that of a Roland Emmerich film (2012, The Day After Tomorrow, Independence Day).

Director Brad Peyton (Cats & Dogs: The Revenge Of Kitty Galore) throws in a few scenes that show Ray rescuing complete strangers.  We need to be reminded that he’s a nice guy, remember?  That’s not the focus though.  Ray steals/borrows a fire department helicopter and goes on a journey to rescue his daughter and soon-to-be ex-wife who have both become trapped by fallen buildings.

I can’t imagine Ray winning the lottery anytime soon.  That’s because he’s used all of his luck making it to the end of this movie.  The situations he extracts himself from are so cartoonish and far-fetched that they’re impossible to take seriously.  There’s zero tension here.  You’ll just spend two hours admiring the work of the sound technicians and visual effects artists.

Such a farcical premise could have worked with a few laughs but it’s another area where the film is lacking.  Peyton and the three-man writing team have strangely gone with a melodramatic approach.  We watch an old couple hold each other for the last time before they’re swept away by a tidal wave.  We see an American flag unfurled by the wind as a symbol of strength and patriotism.  Sorry, this just didn’t work for me.