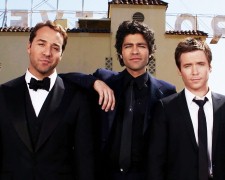 There have been some terrific television series over the past decade such as Lost, Breaking Bad, The Sopranos and Mad Men. I feel somewhat ashamed to admit that I haven’t seen any of them.  I spend so much time pursuing other interests (work, golf, movies) that I rarely have the time to sit on the couch at home and immerse myself in a successful, long-running TV show.

I use the term “rarely” because I have made exceptions.  One of those is Entourage.  It premiered on HBO in July 2004 and I was quickly lured in by the subject matter.  Loosely based on the life of Mark Wahlberg, the series followed the adventures of a young actor named Vincent Chase (Grenier) trying to find fame and fortune in Hollywood.

The show’s title signified that it was about more than just Vincent.  He was continually surrounded by a group of loyal, long-time friends who were riding his coattails in search of their own success.  E (Connolly) was an inexperienced manager battling to keep his client in check.  Drama (Dillon) was a struggling actor looking for a break out role.  Turtle (Ferrara) was a simple driver in search of better business opportunities.  Ari (Piven) was a ruthless, foul-mouthed agent trying to juggle work with family.

The show was framed as a comedy but the characters went through a number of ups and downs across its 8 seasons (the final episode aired in September 2011).  For this cinematic follow up, which picks up where the series left off, writer Doug Ellin doesn’t have time for complex storylines or character reintroductions.  He’s kept things light and succinct.

Vincent, now one of the biggest stars in Hollywood, is looking to take his career in a different direction.  After a failed marriage (it lasted only 9 days), he’s convinced a major studio to give him $100 million to make his directorial debut with a modern-day adaptation of Jekyll & Hyde.  Unfortunately, the project is now over budget and the Texas-based financier (Thornton) is worried.  He’s sent his goofy son (Osment) to Los Angeles to take charge of the film and as you can imagine, Vincent and his entourage aren’t too pleased.

I’ve got friends who can’t stand these characters.  They see them as sexist, talentless, self-centred losers that highlight everything that’s wrong about the film industry.  They party, they drive fast cars, and they spend money as if it’s their last day on earth.  Yeah, I can see that point of view… but I still like them.  They’re simply a bunch of ordinary guys trying to forge a career and have fun in the process.  I know many folk who are similar.

Filled with cameos (some of them quite bizarre), this film is more of a celebration of the Entourage series rather than a continuation of it.  We get to catch up with these characters for the first time in 4 years, have a few laughs, and realise that not much has changed.  It also provides a fast-paced, slightly over-exaggerated look at the inner-workings of the studio system in Hollywood (although not as juicy as the recent Sony email leak).

Those unfamiliar with the TV series may struggle without the background knowledge (although a Piers Morgan interview to open the film may help).  Fans of the show, and that’s clearly the target audience, will lap it up.