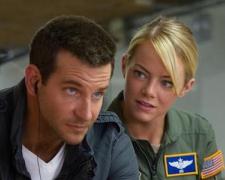 I have friends who are brilliant joke tellers.  Their confidence, their timing and their wording are spot on.  When I try to relay the same joke to a different group, I almost always fail.  The punchline doesn’t have the same humorous effect if you don’t get everything right beforehand.

That’s my reaction to Aloha – a romantic drama from writer-director Cameron Crowe, the man responsible for the much loved Jerry Maguire and the critically acclaimed Almost Famous (which won him an Academy Award).  In a recent blog post, Crowe stated that he wanted to make a small film “about Hawaii, and the lives of these characters who live and work in and around the island of Oahu.”

It sounds like a nice, well-meaning idea but, just like my joke-telling, it’s been poorly executed.  These characters are boring and the storyline is confusing.  I’m not alone in thinking this.  During the Sony email leaks in late 2014, studio co-chairman Amy Pascal said that several parts made “no sense” and that “I’m never starting a movie again when the script is ridiculous.”

There are elements I still don’t understand but let me do my best to summarise the plot.  Bradley Cooper plays Brian – a dull American soldier who was injured in Afghanistan and now works for a billionaire weapons contractor (Murray) looking to launch a satellite into space.  He’s not much for small talk and seems to have closed himself off from the world following a recent divorce.  The guy has issues.

A trip to Hawaii has put him on a collision course with two lovely ladies.  The first is Allison (Stone) – a chatty Air Force Captain who realises Brian is a “train wreck” but can see something beautiful beyond his prickly exterior.  She wants to win his affections.  The second is Tracy (McAdams) – an ex-girlfriend from 13 years ago who has married another man (Krasinski) but still has a small place in her heart for Brian (for reasons that are revealed).

It’s a bizarre romantic triangle.  Tracy is the most puzzling character but this is largely a fault of the screenplay.  Her husband is a decent, hard-working guy but since he’s so uncommunicative (laughably so), she has thoughts about leaving him and jumping back into Brian’s arms.  It all happens too quickly and it’s hard to understand her actions.  Brian doesn’t seem to know what he wants either as he oscillates back and forth between the two women.  One minute he’s the friend.  The next minute he’s the seducer.

Heavily contributing to the film’s problems is the farcical storyline involving the billionaire sending nuclear weapons into space.  I was starting to wonder if I was watching a sci-fi flick as opposed to a romantic drama.  Was it supposed to be a political statement?  The subplot involving the native Hawaiians and the blessing of a “gate” didn’t do much for me either.

I’m sure Cameron Crowe will bounce back and make some more great films… but most will acknowledge that Aloha is a failure.