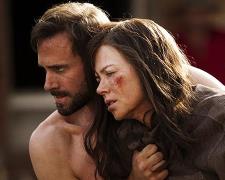 Matthew Parker (Fiennes) is a pharmacist who has accepted a job offer in a small, remote outback town.  He describes it as a “step backwards” in terms of career but it’s a choice he’s made for the sake of his family.  His wife, Catherine (Kidman), looks after the home and their two children, Lily (Brown) and Tommy (Hamilton), are attending the local school.

Late one night, Matthew sees his kids sneak out of the house.  He suspects they’re up to mischief but he makes the decision not to go after them.  The next morning, he gets up early for work while Catherine sleeps in.  It’s not until late that afternoon that they both realise something is amiss.  Lily and Tommy didn’t sleep in their beds and didn’t show up at school.  A few phone calls confirm a horrifying reality – no one knows where they are.

Catherine notifies the authorities and Detective David Rae (Weaving) is asked to investigate.  A number of scenarios are going through is mind.  Did Lily and Tommy go roaming into the desert and simply become lost?  Did they run away from home and are hiding somewhere?  Did they run into the wrong person and encounter foul play?  The clock is ticking and the answers are not clear.

Strangerland is a grim Australian drama that asks tough questions of its characters.  There’s a moment where Matthew, despite knowing his children are missing, goes to work to open the pharmacy.  It’s so that he can help a mother whose child is having an asthma attack.  Catherine is quick to voice her disapproval.  She can’t understand why her husband is more concerned for the welfare of someone else.  How would you react in the same situation?

We also learn there’s a reason why the Parker family are living in such an isolated community.  They’re looking to escape their troubled past and make a fresh start.  Matthew would rather keep these details from Detective Rae so that they aren’t the subject of gossip and innuendo.  Is he right to do so?  Catherine has the same concerns when she comes across Lily’s diary.  It shows a side to her daughter that she’d rather not share.

Strangerland is a strong debut feature from director Kim Farrant who has assembled a high-profile cast headlined by Academy Award winner Nicole Kidman.  The style and premise reminded me a little of Ivan Sen’s terrific Mystery Road (released back in 2013).  Composer Keefus Ciancia helps build tension with his unsettling score and cinematographer P.J. Dillon highlights the rich colours in the remote Australian landscape.  There’s a particularly impressive scene where a dust storm sweeps through town.

The screenplay starts to run out of puff in the later stages but this is still to be admired for its unflinching look at a tragic situation.