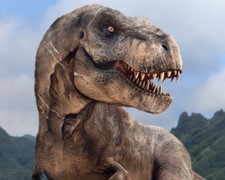 If at first you don’t succeed then try again.  We all know the original dinosaur theme park (known as Jurassic Park) didn’t end so well.  Things got out of hand and a bunch of people got killed.  Oops.  Thankfully, most have forgiven and forgotten.  The island in Costa Rica has been rebuilt and rebranded as Jurassic World.  It attracts more than 20,000 visitors a day and when you throw in $7 soft drink prices, it’s easy to see why company shareholders are happy.

Sadly, those mums and dad who have invested their hard earned savings in Jurassic World are about to see the share price plummet.  The company CEO and operations manager have come to the realisation that “no one is impressed by dinosaurs anymore.”  With attendance levels stagnating, they’ve given orders to the genetics team to come up with something bigger, louder and with more teeth.

That’s where Indominus Rex enters the picture.  This corporately sponsored dinosaur has the strength of a Tyrannosaurus but with increased intelligence and self-awareness.  It’s been locked up in isolation and fed huge slabs of meat each day.  Oh, and it was actually living with another dinosaur which, instead of becoming friends with, ended up being a large meal.

So what could possibly go wrong with this situation?  The answer is obvious.  The Indominus Rex escapes and we follow a bunch of characters who are trying to make it to the end of the movie outside of its stomach.  Chris Pratt plays a resourceful ex-Navy officer who is now a dinosaur expert.  Bryce Dallas Howard plays the aforementioned operations manager who can see her career going down the drain.  Vincent D’Onofrio plays a military contractor with questionable motivations.  Nick Robinson and Ty Simpkins play two sibling teenagers who have become lost in the theme park.

It’s a mildly interesting story.  If you’re anti-capitalism and anti-genetic modification, you’re likely to go along with what the four-person writing team are trying to say.  There’s a strong scene where the CEO (Khan) berates the scientists for creating a “monster” but he is quickly reminded that everything in the profitable theme park was created in a test tube.  Should we be “playing God” and creating any kind of dinosaurs purely for our own entertainment?

These thought-provoking moments are nice but relatively short lived.  The majority of the film is spent watching the cast as they run from the dinosaurs and concoct a plan to kill them.  They’re not the brightest of characters though.  They seem to spend more time running into danger as opposed to away from it.  They also have an odd sense of humour given the gravity of the situation and the increasing body count.  Those traits I’m willing to forgive as this is a movie and it’s intended to be entertaining… although I’m puzzled by how Bryce Dallas Howard is able to run in high heels!

Credibility issues aside, Jurassic World is worth seeing for the pure spectacle.  Academy Award winning composer Michael Giacchino (Up) borrows John Williams’ iconic score from the earlier movies and it’s great to hear it again.  The sound and visual effects artists (who must have taken a big slice of the budget) have done a superb job creating these fearsome creatures.  It’s hard not to feel a shiver down your spine when the Indominus quietly sneaks up on unsuspecting characters.

The original Jurassic Park dominated the box-office in 1993 and is regarded as an iconic piece of cinema.  Jurassic World won’t quite have the same impact but it’s still an engaging blockbuster that many will enjoy.