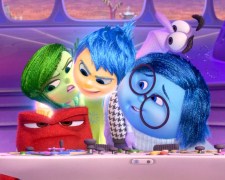 With an increasing number of animated features being released each year, it’s becoming tougher for writers to craft fresh, ground-breaking screenplays.  One guy who keeps delivering is 46-year-old Pete Docter.  He has 5 feature films to his credit and each is highly regarded by both critics and the broader public – Toy Story, Toy Story 2, Monsters Inc., WALL-E and Up.  Not a bad list, huh?

I’m not sure he’ll quite reach Black Caviar status but Docter is now 6 wins from 6 starts.  Inside Out is stunning achievement that blends creativity, humour and emotion.  I’ll be saving it a spot in my top-10 list at year’s end.

The story centres on a vibrant, impressionable 11-year-old named Riley (Dias).  Her life has been pretty great up until this point… but her world is uplifted when her parents relocate from Minnesota to California due to work.  It’s left Riley feeling alone.  She’s had to leave behind her loyal friends and ice-hockey teammates and start again in a new city.  There are other problems too.  She overhears her parents arguing one night about their financial concerns.

To illustrate the turmoil that Riley is going through, most of the film takes place inside her head!  We see a small control room that is home to five talkative characters – Joy, Sadness, Fear, Disgust and Anger.  Each day, they guide her actions, shape her personality, and store her most precious memories.

It’s a fascinating concept that is rich in detail.  There’s a hugely entertaining sequence where we go to Dream Productions – an elaborate movie studio where Riley’s dreams are created.  There are other cool locations that explore her imagination, subconscious and abstract thought.

Perhaps the most intriguing element is a place called Long Term Memory.  It’s a labyrinth of high shelves that store Riley’s memory balls.  The shelves are cleaned regularly by a maintenance team (aptly known as the Forgetters) that dispose of memories no longer required.  Oh, and you know how annoying it can be when you get a song stuck in your head?  That’s the memory workers causing their own brand of mischief.

The film’s most impressive attribute is the way it explores human emotions and the way they are so often intertwined.  We can’t always be happy.  To experience the joy of success, you need to experience and overcome the fear of failure.  On the flip side, a relationship can provide much joy but there will be an inevitable sadness if it doesn’t pan out as expected.  These are powerful messages that both kids and adults will relate to.

Many animated features utilise the voices of Hollywood stars.  That’s not the case here with Docter relying on those best known for their television work such as Amy Poehler (Parks & Recreation), Phyllis Smith (The Office) and Richard Kind (Mad About You).  They all do an amazing job bringing these characters to life.  Who knew talking emotions could be so funny?  I love the moment where Fear (voiced by Bill Hader) articulates his thoughts – “We did not die today.  I call that an unqualified success!”

Very young children may have trouble keeping up with some of the concepts but for everyone else, Inside Out is a terrific animated feature that will leave you smiling throughout (with the odd chance of tears).

You can read by interview with writer-director Pete Docter by clicking here.