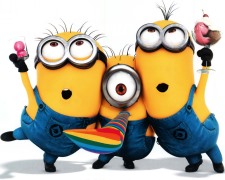 I enjoyed the two Despicable Me movies for one major reason – Steve Carell.  He stole the show with his portrayal of a Gru – a super villain with a softer heart than you might expect.  Therein lies the problem with Minions.  It’s a spin-off prequel that focuses its attention on the short, yellow, unintelligible creatures.  They’re not as interesting.  They’re not as exciting.

The story begins with a few flashbacks to ancient times.  Minions have been on the planet since the days of the dinosaur and they’ve been causing mischief and mayhem.  Zipping forward to the 1960s, we follow three minions (Stuart, Kevin and Bob) who are trying to latch onto a new villain who they can assist.

They eventually stumble their way to Villain-Con – a huge conference in Orlando where bad guys get together each year to find new henchmen and discuss their evil plans.  The keynote speaker is Scarlett Overkill (Bullock), the world’s first female super villain and perhaps the biggest in the business.  She takes the three minions under her wing, takes them to London, and asks that they steal the Queen’s diamond-encrusted crown.

The minions are strange creatures.  Their mumbling is cute for a while but it gets tired quickly.  I couldn’t understand their motivations either.  They want to work for the most sinister people on the planet but do they really expect to be treated nicely?  How can it be a shock when Scarlett Overkill uses and abuses them?

The film’s trailers suggested that Sandra Bullock’s leading character might offer the bulk of the entertainment.  That hasn’t eventuated.  Her character isn’t given enough screen time and doesn’t offer much in the way of humour (in contrast to the lovable Gru).  It also feels like writer Brian Lynch is stretching to make this premise last 90 minutes.  The introduction is too long and there’s a bunch of unnecessary scenes involving the large army of minions in Antarctica.

There are two family orientated choices on offer over the June school holidays here in Australia.  Minions has a few decent moments and will probably win over most kids… but Inside Out is the film you should be seeing.