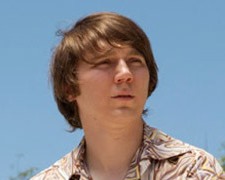 A great biopic can generate interest in a subject matter that you’d never think about otherwise.  Before walking into this film, I knew The Beach Boys were a popular band who rose to fame once upon a time but that’s about it.  I couldn’t sing you any of their songs.  I had never heard of the name Brian Wilson.

Love & Mercy begins in the 1980s by introducing us to the middle-aged Wilson (played by John Cusack).  This isn’t a guy who is enjoying fame and fortune.  He comes across as someone who is sleepy and aloof.  Looking for a new set of wheels, he wanders into a car dealership and strikes up a conversation with one of the sales staff, Melinda (Banks).  She hands Wilson and a business card and on the back he writes three words – lonely, scared and frightened.

To help understand what led Wilson to this point, writers Oren Moverman and Michael A. Lerner slip back to the 1960s and show us how The Beach Boys came to be.  It was the release of their second album, Surfin’ U.S.A., they helped them become household names.  Unlike the other members of the group though, Wilson wasn’t interested in touring the globe and performing on stage.  He was more comfortable working behind the scenes, writing the lyrics, and crafting their distinctive instrumental sounds.

For the first half of the film, it’s these flashbacks that provide the most interesting material.  Thanks to a superb performance from Paul Dano, who plays the younger Wilson, we’re able to get inside his character’s head and appreciate his creative vision.  You’ll be amazed when you see his thought process behind Pet Sounds, ranked by Rolling Stone Magazine as the second greatest album of all time.  Wilson was an artist who did things differently.

The 1980s storyline takes more prominence in the film’s second half.  Wilson is now divorced and has been through a lengthy addiction to drugs and alcohol.  He hasn’t seen his parents and his children in years.  He’s no longer writing music and he spends most of his day in bed.  It’s clear that he’s battling depression.

The man he thinks is helping him is Eugene Landy (Giamatti), a California-based therapist who is treating Wilson 24 hours a day.  Landy is an extremely controlling individual.  At a back-yard barbeque, he shouts repeatedly at Wilson just for eating his hamburger before everyone else.  When Melinda (the car salesman) and Wilson go on a date, Landy demands a full report on the night’s events.  If this was East Germany, you’d assume he was working for the Stasi.

It’s a “truth is stranger than fiction” kind of tale.  A world-famous song writer had given up control of his well-being to a questionable psychologist.  Everyone seemed too afraid to question the situation and it went on for several years.  At first, I thought Giamatti was over playing the character (he’s that villainous) but I read a recent review with Brian Wilson where he noted that he was “scared to death” when he first saw Giamatti’s performance.

Parts of the film tend to drag a little and I’m quite sure the screenplay gets to the heart of Wilson’s relationship with his father and other members of the band.  Still, this is an enlightening true story that provides insight into the ups and downs of a one-of-a-kind individual.