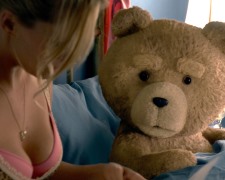 A low brow comedy about a drug-taking, foul-mouthed teddy bear.  It may like a moronic idea but Ted was 2012’s highest grossing comedy at the box-office.  It took in $218 million in the United States and an additional $330 million overseas.  Such was the love for Seth MacFarlane that the Academy gave him a gig hosting the Oscars a few months later.

A sequel was inevitable.  Mark Wahlberg returns as John but you won’t see him alongside his wife (played in the original film by Mila Kunis).  We’re told they went through a messy divorce – a fact that John hasn’t yet recovered from.  He’s too depressed to even go on a date with another woman.  He’s just sitting at home, smoking weed and watching old episodes of Law & Order.

Life isn’t going all that well for Ted either.  He’s now married to Tami-Lynn (Barth) but the two encounter difficulties when they try to adopt a child.  Ted is told that, under the law, he is considered a piece of property as opposed to a real person.  This mean that he cannot adopt, he cannot have a job, he cannot have a bank account, and, worst of all, he cannot be married.

It’s time to head to court in search of justice.  Given their lack of funds (they spend most of it on drugs), John and Ted go in search of a lawyer who can help them out pro bono.  The best they can find is Samantha – a 26-year-old who has just finished law school and has zero work experience.  She doesn’t exactly do things by the book but by the time the trial gets underway, she’s fully prepared and is ready to fight for her new best friends.

Most would agree this isn’t as funny as the original.  I’d add that it’s not as crude or random (which works against the film).  There are laughs… but the best already appear in the film’s trailer.  There’s also an element of repetitiveness such as the use of Patrick Warburton’s mean-spirited character at Comic-Con and an overused joke about internet searches.  One moment left me smiling though and it involves a timely reference to Jurassic Park (thanks John Williams).

The storyline isn’t all that interesting either.  Giovanni Ribisi returns as Donny – a janitor at a toy company who wants to kidnap Ted and use his secrets to make his own talking teddy bear.  It’s all too similar to the earlier film.  The CEO at the toy company, who is keen to go along with Donny’s plans in pursuit of profit, is also a flakey character who doesn’t have any idea what he’s doing.

The success of Ted will ensure crowds flock to this sequel but when you put the films side by side, it’s each to see which one generates the most laughs.