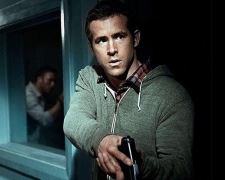 Damian Hayes (Kingsley) is obscenely wealthy.  I’m talking a Warren Buffett kind of wealthy.  He commands a huge amount of power in the business world.  He owns a lavish apartment in New York City where everything seems to be gold plated.  He has an expensive car and a driver who takes him everywhere.

So what do you get the man who has everything?  The answer is a new body.  Damian has been diagnosed with cancer and has been given less than 6 months to live.  After being left a mysterious business card, Damian has stumbled across a secretive company that conducts a medical procedure known as “shredding”.  They can take your mind and place it in a fresh body that has been genetically engineered to be near-perfect.  It’s as close to immortality as you can get.

It’s not quite that simple though.  There are rules that need to be followed.  For starters, you have to be prepared to start a completely new life.  The technology is still secretive (guess they don’t want human rights groups after them) and so Damian can’t go back to his nice apartment and drink expensive bottles of wine with his business associates.  He’ll be given a new identity, a new past, and a new town.

I’m not all that sure why Damian wants to go through with the procedure.  When you’ve achieved everything you want out of life, why start again?  If he has a fear of death, he’s not really showing it.  Anyway, the procedure goes to plan and Damian wakes up as a handsome 34-year-old known as Mark Hale (Reynolds).  He doesn’t have much to complain about… at first.  He’s been given the keys to a new home in New Orleans where he plays basketball, goes jogging, drives fast cars, and sleeps with numerous women.

Don’t you hate it when you buy something you can’t use?  I’ve bought a few shirts online that turned out to be the wrong size.  Damian has taken this to a whole new level.  He should have been shrewd enough to remember the Latin phrase “caveat emptor” – let the buyer beware.  It may have that “new body smell” but it turns out Damian’s new body is anything but.  He starts have hallucinations which relate to the body’s “original owner”.

Directed by Indian-born Tarsem Singh (Immortals, Mirror Mirror) Self/Less is a poorly paced action thriller that pushes for too many twists.  You can see the groundwork laid well in advance (e.g. an odd comment made about metal in a machine).  It moves quickly between events and the scenarios feel overly constructed.

There’s a moment where Damian tracks down the wife (Martinez) and child of the original Mark Hale in search of answers.  He comes across as a helpful, compassionate individual but this doesn’t make a lot of sense.  It contradicts the version of Damian from the opening half-hour where we see him arrogantly trying to reconcile with his estranged daughter.  I realise he has a different body but shouldn’t his personality be the same?

The film culminates with a bland finale that involves a doctor (Goode) who has taken on super villain like qualities.  He’d make a good addition to a Marvel film.  John Woo’s Face/Off (released back in 1997) made a much better fist of the “body changing” concept.  Watch it instead.