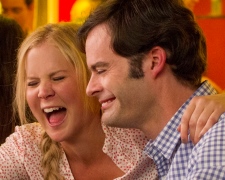 Trainwreck opens with a middle-aged father, Gordon (Quinn), having a heart-to-heart with his two young daughters.  In trying to explain why he’s leaving their mother for another woman, Gordon cunningly uses the analogy of a toy doll – “would you like to play with one doll for the rest of your life?”  The girls naturally say no.  He’s made monogamy sound like a foolish concept.

Skipping twenty-odd years into the future, we find those same girls have grown up with two very different views when it comes to relationships.  Kim (Larson) is happily married with one child and another on the way.  Amy (Schumer) loathes the idea of commitment and sleeps with a different guy every night.  It’s as if she’s heeded her father’s advice.  She drinks beer, she smokes weed and she describes herself as “just a sexual girl.”

He has a bunch of producing and screenwriting credits but up until now, Judd Apatow has only directed 4 feature films – The 40-Year-Old Virgin, Knocked Up, Funny People and This Is 40.  Trainwreck can now be added to that list but in a curious departure, it is not based on his own screenplay.  That honour belongs to the film’s star, Amy Schumer.  Apatow and Schumer first met in 2011 and after tossing around a few ideas, they settled on this idea of an unorthodox romantic comedy.

Put simply – this is the Amy Schumer show.  She takes on the bulk of the jokes and has created an unsteady character with a forever changing personality.  There are times when she is funny, loveable and engaging.  There are times when she is cruel, selfish and insecure.  If you’re struggling to work out what she wants out of life… well, that’s because she doesn’t know either.

Throughout its first half, the film’s tone is largely comedic.  Amy works as a writer for a men’s magazine in New York City.  Their demanding boss (an almost unrecognisable Tilda Swinton) asks them to write moronic, low-brow stories such as an exclusive about whether garlic changes the taste of semen.

To help secure a promotion to executive editor, Amy has been tasked with writing a feature article on Aaron Conners (Hader), a renowned sports physician.  The problem is that she knows nothing about sports.  She lists the Long Island Mediums and the Orlando Blooms when quizzed about her favourite teams.

Amy’s life outside of work is equally problematic.  Her father isn’t happy about being placed in an assisted living facility.  Her sister isn’t happy with her continual drinking and “loose” lifestyle.  Her quasi-boyfriend (Cena) isn’t happy when he learns she’s been sleeping with other guys.  Amy takes it all in her stride and laughs off any criticism.

There are only two ways you can take a narrative like this.  Amy could have continued with her alienating ways during the film’s second hour but instead, she picks the expected option and goes through an audience-friendly reformation.  She develops a close connection with Aaron (who hasn’t been in a relationship for 6 years) and finally starts to open up about her anxieties.

Not everything in Trainwreck works.  Its message gets a little jumbled in the later stages and there are some puzzling scenes (such as one involving celebrity cameos) that distract rather than entertain.  For the most part though, it’s a fun, crude comedy with an outrageous central character and plenty of great one-liners.