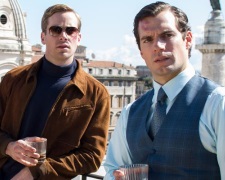 How hard is it to create an imaginative villain?  I’ve sounded like a broken record throughout this season of Hollywood blockbusters but I feel it’s a question that remains unanswered.  The Man From U.N.C.L.E. falls back on the stuff we’ve seen before.  It’s set in 1963 where an undercover criminal organisation with links to the Nazis is looking to build a nuclear device.  They lack the expertise and so they’ve kidnapped a German scientist to help get the job done.

Perhaps the reason we fall back on such stereotypical villains is because they are unrealistic and non-threatening.  How would the audience react if the bad guy was a child abuser, a people smuggler, a drunk driver, or a wife beater?  What if it was a “troubled individual” who walked into a cinema and starting shooting up the place?  The reality is that people go to the cinema to be entertained (apparently).  They don’t want the depressing horrors of what they see on televisions each night.

Based on the popular 1960s television, The Man From U.N.C.L.E. has been reinvigorated for the big screen by British director Guy Ritchie (Lock, Stock & Two Smoking Barrels).  The two guys trying to stop the atom bomb from falling into bad hands come from very different backgrounds.  Napoleon Solo (Cavill) is an American CIA agent who oozes charm and sophistication.  Illya Kuryakin (Harmer) is a Russian KGB agent who loves to use his fists at any opportunity.

These two don’t want to be working together… but there isn’t really a choice.  They must team up and use their respective skills – lock picking, safe cracking, and villain shooting – to locate Victoria Vinciguerra (Debicki), the well-dressed head of the criminal organisation.  Also along for the ride is Gaby Teller (Vikander), the daughter of the kidnapped scientist who will help point them in the right direction.

If you’re old enough, think back to some the great action heroes of the 1980s – Bruce Willis in Die Hard, Arnold Schwarzenegger in Predator, and Sylvester Stallone in Rambo.  Got that thought in your head?  Good.  Now think of the exact opposite.  That’s the best way of describing the two leading characters here.

Henry Cavill and Armie Hammer barely work up a sweat.  They strut around in their fine clothes, they speak like suave businessmen, and they look all too relaxed as they extricate themselves from perilous situations (a brief scene involving an electric chair the only exception).  The novelty is amusing in the early stages but there aren’t enough laughs to make these guys interesting enough for a two-hour feature.  They can’t match the chemistry shared by Robert Downey Jr and Jude Law in Ritchie’s last action franchise, Sherlock Holmes.

Stylishly shot but light in terms of story, the film’s true purpose is revealed as the credits start to roll.  As we saw with last week’s Fantastic Four, this is an origin story which leaves the door wide open for possible sequels.  Whether they get the green light will depend on whether The Man From U.N.C.L.E. can recoup its $75 million budget.