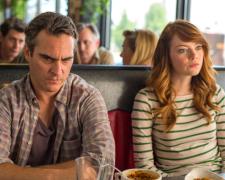 We live in a world that is full of contradictions.  People are happy to illegally download movies off the internet but they would not steal a DVD of the same movie from an electronics store.  A drug dealer can be sentenced to death in one country while being given a slap on the wrist in another country.  A farmer who creates food can be paid next-to-nothing while a person who kicks around a football can be a multi-millionaire.

Woody Allen is a filmmaker who appreciates that life isn’t always fair and reasonable.  In his brilliant 2005 thriller Match Point, he followed a former tennis professional who murdered his mistress so as to protect his relationship with his wealthy fiancé.  The cops were closing in and were about to press charges until a stroke of good fortune saw him get away scot-free.  It highlighted the fact that sometimes it’s better to be lucky than good.

Allen taps into similar themes with his latest effort, Irrational Man.  When we first meet Abe Lucas, he’s a depressed philosopher who admits that he’s “hit rock bottom”.  He lives alone, he drinks too much and he now has a very bleak view of the world.  Abe has accepted a plum role at a prestigious college and from his first day, staff and students are gossiping about his troubled past.  It’s as if he’s taken the job solely to pay the bills rather than to reinvigorate what was once a successful career.

While at a diner with Jill (Stone), one of his brightest students, he overhears a conversation in the adjoining booth.  A woman is in tears while talking about her fight to get custody of her children.  She believes the corrupt judge is going to rule in favour of the father because they are old friends.  While he has no knowledge of these people and this case, the story enrages Abe.  He hates the fact that he lives in a world where a judge could so easily abuse his power and get away with it.

What happens next may surprise you.  Abe decides to kill the judge.  If carefully planned, he believes he can get away with it because he has no obvious motive.  It could be a perfect murder.  As horrible as it sounds, Abe suddenly finds himself coming “alive” again.  He’s happy and he’s writing some of his best ever work.  His life suddenly has meaning.  Things get even more bizarre when Jill starts to fall in love with Abe.  He tries to resist so as to protect the teacher-student relationship but she has developed an unstoppable attraction to a man she finds fascinating.

You’ll have to see the film to find out where it goes next.  It’s not Woody’s best work but it’s still a delightful black comedy with a few observations to make about fate and justice.  Joaquin Phoenix and Emma Stone make a great pair with Parker Posey doing her best with a scene-stealing performance as a lonely academic competing for Abe’s affections.  It comes with Allen’s traditional fingerprints – great casting, great dialogue and a great punchline.

A few moments feel out of place (such as a bizarre game of Russian Roulette) but most of the scenes stick and add up to something that is wickedly funny.