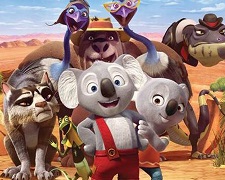 Most Australians would be familiar with the fictional character Blinky Bill.  Of those, I’d suggest only a small few know of his origins.  Three books following the adventures of this talking koala were written and illustrated by Australian author Dorothy Wall in the 1930s.  They were based on stories that she’d created and told to her own child.

Wall’s books were popular but the royalties didn’t provide her with sufficient income.  She tried to sell the rights to American film studios and English china makers without success.  Running out of options, she travelled to New Zealand (where she was originally born) and accepted a well-paying job as an illustrator for two newspapers.  That was the end of Blinky Bill.  She never wrote another book prior to her death in 1942 at the age of 48.

It’s always interesting to look back with the benefit of hindsight and see what stories survive the test of time.  Shakespeare’s works are still performed regularly today while other playwrights from the 16th and 17th Centuries have faded into oblivion.  Wall’s Blinky Bill books continue to endure.  They’ve never been out of print in Australia and have been adapted into multiple television series.  There was also an animated feature released in 1992 which grossed almost $2 million at the local box-office.

This rebooted Blinky Bill movie was produced by Flying Bark Productions, a small company based in Sydney who specialise in children’s animation.  They didn’t have a $100 million budget so don’t go along expecting the revolutionary visuals that you’d associate with companies such as Pixar (Inside Out) and Dreamworks (How To Train Your Dragon).  This is simple stuff.

The story could be described the same way.  It begins by introducing us to Blinky Bill and his fellow animal friends.  They’re a fun bunch who love to create mischief.  This raises the ire of a power-hungry goanna named Cranklepot who wishes to put a stop to their antics.  Such an opportunity is about to present itself.  Blinky’s father goes missing and Cranklepot seizes control of the town.  His first villainous act is to evict Blinky and his mother from their tree home and move in himself.

This forces the inexperienced Blinky to go on a long adventure in search of his missing dad.  This takes him across the Australian outback where he comes across an assortment of curious characters including a chatty lizard, a sinister cat, and a fellow koala looking to create a new life for herself in a zoo.

This is a film targeted squarely at young kids and the screenplay reflects that fact.  The characters are cute and the narrative is easy to understand.  It’s the sort of thing children might watch after school or on a Saturday morning.  That comparison feels appropriate as Channel 7 recently commissioned a 26 episode follow-on television series that will go to air in 2016.

The only hook for adults is the well-known Aussie cast.  The movie utilises the voices of Ryan Kwanten, Toni Collette, Richard Roxburgh, Deborah Mailman and Barry Humphries.  They’re all very good but the two standouts are David Wenham (as Jacko the lizard) and Barry Otto (as Cranklepot the goanna).