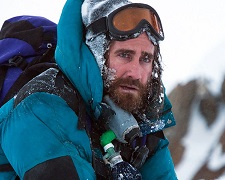 I’ve got some good friends who regularly post inspirational quotes on social media.  They say stuff like “it never gets easier, you just get stronger” and “dream it, believe it, achieve it.”  Movies often promote the same messages.  We watch people go from loser to winner, from rags to riches, and from villain to hero.  It’s seldom the other way round.  We much prefer feel-good tales that leave us feeling positive about life.

There’s nothing wrong with that mantra… but it’s not always a reflection of reality.  That is best illustrated in Everest which chronicles the true story of a group of climbers who tried to reach the peak of the world’s highest mountain in May 1996.

Edmund Hillary and Tenzing Norgay became the first men to conquer Mount Everest in 1953. In the decades that followed, only well-experienced climbers tried to match their achievement.  That changed in the early 1990s when climbing became a more commercial enterprise.  An increasing number of tour companies were accepting large sums of money to help ordinary folk reach Everest’s summit.

There’s an important moment early in the film where these climbers are asked about their motivations.  Their answers are not unexpected.  Why would someone buy a 5,000 piece jigsaw puzzle instead of one with 500 pieces?   Why do we attempt the hard Sudoku problem instead of the easy one?  It comes back to what makes us human.  Many of us love a challenge and the thrill that it provides once achieved.  Oh, and I guess climbing Everest is a great story that you can tell the grandkids about one day.

Crafted by screenwriters William Nicholson (Gladiator) and Simon Beaufoy (Slumdog Millionaire), this film is centred around Rob Hall (Clarke) – the head of a New Zealand based company that has been leading successful Everest tours for the last few years.  The group he’s helping this year include a journalist, a mailman and a wealthy doctor.

The first half of the movie is relatively smooth sailing.  We watch them go through their training regime and appreciate the difficulty of the task.  Even with a lengthy period of acclimatisation, most will still require oxygen tanks when trekking at high altitudes.  Perhaps the biggest determinant of success is the weather.  You’re no chance without calm conditions.

I don’t want to give too much away but suffice to say that not all of these characters are going to make it to the end of the movie.  This isn’t one of the aforementioned feel-good tales.  It doesn’t make a difference how confident or how experienced you are… there are times when nature is always going to prove too strong for man.  It’s a fact that we often ignore or forget.

It’ll be up to audiences to judge their exploits.  Were they just unlucky in their pursuit of adventure?  Or were they foolish in biting off more than they could chew?  There’s plenty to think about here and it’s more than just a run-of-the-mill action film.  That said, the action is still very good.  Icelandic director Baltasar Kormakur (Contraband) used high altitude locations in Nepal and Italy to re-create the Everest experience.  The intense sound of the ferocious winds adds an equally important layer in helping put the audience in the shoes of these hikers.

It was never going to be easy given the large cast but the character development is underdone.  It’s hard to sympathise with a doomed hiker when we know so little about them.  Some of them only get a few lines of dialogue.  Keira Knightley and Robin Wright are added to show the thoughts of “worried wives” back home but again, these scenes are short and clunky.

Above all else, Everest shows that you can dream and believe… but you’re not always going to achieve.