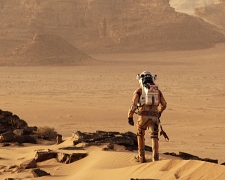 The “leave no man behind” message has been explored in countless movies.  Brave individuals are prepared to risk their lives to save fellow soldiers (Saving Private Ryan), diplomats (Argo), hostages (Die Hard), and politicians (Air Force One).  Director Ridley Scott is no stranger to the subject.  The tagline of his great 2001 war drama Black Hawk Down was exactly that – “leave no man behind”.

Using the updated tagline of “bring him home”, Scott has tried to take rescue movies to a new level with The Martian.  Mark Watney (Damon) is a middle aged botanist who isn’t stuck in a building… or in a plane… or in another country.  He’s trapped on another planet that is located more than 50 million kilometres from our own.

If this was a Star Trek film, Mark would be saved in the blink of an eye.  Captain Jean-Luc Picard could fire up a starship and shout “Warp One, Engage!”  Unfortunately, this is set in a more current timeframe where it takes close to a year for a spacecraft to travel between the two planets.  The cost of such a mission would also be running into the billions of dollars.

To back up slightly, the reason Mark is stuck on Mars is because he was part of a 6-person crew who were visiting the planet to collect important samples.  Only 5 of them made the return trip.  During a savage dust storm, Mark was struck by flying debris, became separated from his astronauts and was presumed dead.  NASA held a media conference advising of the news and a funeral was held soon after.

The Martian is largely told from two perspectives.  Firstly, we’re following Mark Watney on Mars.  He’s a sharp guy and knows there are four necessities he needs to secure for his survival – food, water, air and shelter.  He also needs to find a means of communication.  The research lab’s satellite was damaged during the storm and he has no way of telling NASA that he’s still alive.

The other perspective is that from Earth.  Once NASA realise that Mark survived the storm, there are numerous questions that need to be answered.  Can he be rescued?  How long would it take?  Is it worth the cost?  Should his crew members (already half way back to Earth) be told?  Those most involved in the discussions are NASA head Teddy Sanders (Daniels), mission director Vincent Kapoor (Ejiofor) and media liaison Annie Montrose (Wiig).

It should hold you attention all the way through but The Martian contains too much science and not enough tension.  A number of obstacles are thrown in Mark’s way and we watch as he uses his broad knowledge to overcome them.  It’s very technical and I didn’t understand what he was doing half the time… but I went along with it anyway.  Mark is the master of taking ordinary/broken objects and turning them into something useful.  He also does it with a relaxed attitude and a hatred for disco music.

Based on the 2011 science fiction novel by Andy Weir, screenwriter Drew Goddard (Cloverfield, The Cabin In The Woods) has struggled to condense its wide breadth into a 141 minute movie.  Several parts are rushed – an inevitable problem with having so many characters and subplots.

A young astrophysicist (played by Donald Glover) pops out of nowhere with a cool solution to a problem.  An astronaut is berated by his wife for accepting a lengthy mission and is forgiven seconds later.  A sudden deal is made with the China National Space Administration.  Crowds in Time Square look on as rescue events unfold.  Without the time to develop these subplots in more detail, it all feels too simple, too easy.

The Martian is offering light entertainment (e.g. Independence Day) as opposed to an edge-of-your-seat suspense thriller (e.g. Gravity).  That’s not necessarily a bad thing… but I was expecting something with a bigger emotional punch given the premise.