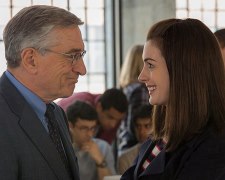 Ben Whittaker (DeNiro) is a 70-year-old retiree from New York who has a self-described “hole in his life” that he’s looking to fill.  His wife passed away 3 years ago and since that time, he’s done everything he can to keep himself busy and occupied.  He’s travelled the world, played golf, read books, watched movies, and cooked great meals.  He’s also attended his fair share of funerals – a downside of having so many elderly friends.

Unfortunately for Ben, all of that isn’t enough.  Retirement isn’t what he expected.  He misses the friendships and general interaction that come with a vibrant workplace.  Inspired by a flyer he comes across, Ben decides to re-enter the workforce and applies to be a “senior intern” for About The Fit, an online clothing store based in Brooklyn.  After an unorthodox interview process conducted by a bunch of twenty-something year olds (who make up most of the company), he’s told that he got the position.

A running theme throughout much of the film is the difference between “old school” and “new school”.  Ben dresses in a suit and tie (complete with a handkerchief in his pocket) while the others dress casually with their shirts untucked.  Ben works by set hours whereas the others drift in and out of the office.  Ben carries an old briefcase while the others carry around iPads and iPhones.

Writer-director Nancy Meyers (Something’s Gotta Give, It’s Complicated) isn’t trying to say that one way is better than the other.  Rather, she’s highlighting that it’s very easy to bridge the generational gap.  Ben learns how to use the latest technology and appreciates the value of open plan offices.  His co-workers get to benefit from his vast experience when it comes to style, romance and chivalry.  His business skills are also of great use.

This is the best thing Robert DeNiro has done in more than a decade.  He has created a sweet, calm, level-headed character who is immensely likeable.  He reminds me of those who spend years of their lives volunteering for charities and sporting organisations.  They’re not doing it for the money or because they’re career driven.  They do it for the love of helping out, interacting with others, and making a small difference.  That seems to be Ben’s philosophy throughout his internship.  He goes home at night with the confidence that he’s still of value to others.

The other key player in this piece is Jules Ostin (Hathaway), the young founder and CEO of About The Fit.  She started the company from scratch but it now struggling to deal with shipping and customer satisfaction issues as it goes through a period of rampant growth.  The venture capitalist investors are keen to recruit a more experienced CEO to help lessen her heavy workload but Jules loves her work and is reluctant to give up control.

Jules is not as easy to like.  She’s determined and well-intentioned.  She is also to be admired for taking a simple idea and turning it into a full-blown business with more than 200 employees.  On the flip side, she struggles with delegation and over commitment.  She has created a life where she can’t devote sufficient time to her staff and family.  This has led to relationship issues at home and reputational issues at work.  There are times when she’s her own worst enemy.

The friendship that develops between Ben and Jules is the film’s heart and soul.  They share some great conversations as Ben tries to size up each difficult situation and subtly steer Jules in the right direction.  There are some silly, unnecessary interludes (e.g. a plot to delete an accidental email) and a few elements are over-simplified but The Intern is still a winner.  In addition to some great laughs, Nancy Meyers has provided much to ponder when it comes to management styles and workplace demographics.