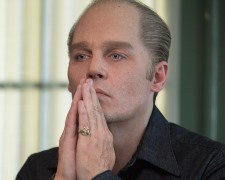 Since the 1950s, the FBI has maintained a list of its Ten Most Wanted Fugitives.  The name of James “Whitey” Bulger was added in 1999 with the FBI offering as much as $2 million for information leading to his arrest.  Bulger was a crime lord who rose to power in Boston in the 1970s and was involved in drug trafficking, money laundering, weapons smuggling, and extortion.  Oh, and he was also wanted for his role in 18 murders.

Brought to the screen by actor-turned-director Scott Cooper (Crazy Heart), the film opens in 1975 where Bulger (Depp) was just a small time crook living in South Boston.  He led a small group who were involved with vending machines, loan sharking and racketeering.  He had a wife, a young son, and was highly regarded within the community.  His older brother (Cumberbatch) has been elected to the U.S. Senate.

The story of Bulger proves that truth really can be stranger than fiction.  John Connolly (Edgerton) was a young FBI agent looking to move quickly up the ranks.  He reached out to Bulger, who he’d known as a child, and suggested they form an alliance.  The FBI would turn a blind eye to Bulger’s illegal activities and in return, he’d feed them information about much bigger gangs that were operating in Boston.  Top of the list were the Angiulo Brothers who headed up Boston’s dark underworld.

Over the next few years, Bulger’s power grew and grew.  The FBI were too afraid to touch him because of the deal that had been made.  They knew that Bulger was arrested, he’d spill the beans about the FBI had been supporting his enterprise.  The police were also letting Bulger go about his business.  He was making that much money that he could afford to bribe whoever was necessary.  This went on for close to two decades.

This is the best performance we’ve seen from Johnny Depp in a while.  He’s created a character who will keep you on your toes throughout the whole film.  One minute, he’ll be making small talk with someone.  The next minute, he’s killing them in a brutal fashion.  One of the film’s best scenes is at a dinner table where is berating someone for giving up the secret to a long held family recipe.  Bulger was an expert in creating fear and that was a major reason for his success.

I’d argue that FBI agent John Connolly, played by Joel Edgerton, is the film’s more interesting character.  However, the screenplay struggles when illustrating his mindset.  Why did he want to form the alliance with Bulger?  Was it simply to further his career?  Did he want to protect Bulger since they were childhood acquaintances?  Did he ever have any doubts about what he was doing?  Connolly’s methods are continually questioned by his wife and his fellow FBI agents (these scenes become repetitive) but he never shows any hesitation.

The major take away from Black Mass are its themes of power and corruption.  Most folk from Boston knew that Whitey Bulger was bad news.  What they didn’t know was that the tax-payer funded organisations designed to stop people like Bulger… were just as bad.