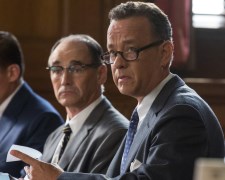 Steven Spielberg’s last film, Lincoln, was an historical drama about a man trying to change the law.  It followed Abraham Lincoln’s efforts to abolish slavery by pushing the 13th Amendment to the United States Constitution through Congress.  Lincoln faced huge opposition but he stuck by his guns and is now regarded as of the greatest U.S. Presidents.

Bridge Of Spies isn’t about someone trying to change the law… but rather someone attempting to uphold them.  Based on actual events, the film begins in 1957 with lawyer James Donovan (Hanks) asked to represent a man, Rudolf Abel (Rylance), accused of being a Soviet spy.  Donovan acknowledges upfront that he has no experiences in such matters.  His area of expertise is insurance law and so he tells Abel that “this will be a first for both of us.”

It’s obvious why Donovan was given the job.  This is a case that no one wanted him to win.  Relations were tense between the United States and the Soviet Union with each fearful of their growing nuclear programs.  Rudolf Abel’s arrest was front page news in New York City and the CIA needed to see him convicted.  It would help assure the public that the United States had the better intelligence and the upper hand.

So was Abel guilty?  Spielberg’s film skirts around that question.  It opens with an absorbing, dialogue-free sequence as we watch Abel go about his business just prior to his arrest.  It’s clear that he was involved in “something” but we’re never really sure how much he knows, how many people are involved, and who he’s working for.  We don’t get to see the evidence compiled by the CIA.  We don’t get to see Donovan ask the question directly of his client.

The film’s reluctance to delve into Abel’s actions is a weakness.  If we knew that his activities as a spy led to the deaths of American citizens (and I’m not saying they did), would we feel as sympathetic towards he and Donovan?  Bridge of Spies is structured so that it creates a “Donovan versus the world” type scenario.  He’s the good guy lawyer who wants to do things by the book.  Everyone else is the enemy.  His wife, his family, his co-workers, the CIA, the legal fraternity, the Government, and the public all take turns in questioning his loyalty to the American cause.  It’s overdone.

Thankfully, the film changes tact at the half way mark and becomes more complex, more interesting.  While trying to take photos over Russian airspace, an American plane is shot down and its pilot captured.  A prisoner swap seems like a simple solution but that comes with political ramifications.  Neither side wants to admit they’ve been spying on the other.  As someone without links to the U.S. Government, Donovan is flown to the volatile East Germany and asked to negotiate a very important trade.

Tom Hanks is at his very best here.  During the early scenes, he portrays James Donovan as a smart, level-leaded individual.  He’s a man of principles.  As the film progresses, we see a more cunning side to his personality.  He’s not afraid to act dumb and take calculated risks in pursuit of his objectives.  For example, he uses his head cold to great effect.  Mark Rylance, more known for his stage work, is equally imposing as the quiet Rudolf Abel.  He keeps his cards very close to his chest.

Touted as one of this year’s awards season contenders, Bridge Of Spies holds the audience’s hand a little too much but it’s still a gripping true story with relevance today.