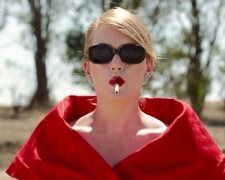 Last week, I saw The Lobster – a movie set in a dystopian future where those people not in a relationship have 45 days to find a partner or else they will be turned into the animal of their choosing.  It was one of this year’s strangest films (but still worth seeing).  The premise for The Dressmaker isn’t as unusual… but it’s not conventional either.  Many believe this term is used too often but I’m going to describe it as “quirky.”

Set in the 1950s, the film opens with the impeccably dressed Tilly Dunnage (Winslet) stepping foot in the tiny outback town of Dungatar.  Her first words set the tone for the film – “I’m back you bastards.”  A successful dressmaker now living in Paris, Tilly hasn’t returned to her birth town to catch up with old friends.  It’s clear she has a hatred for the place.  Rather, there are questions about her upbringing that she needs answered.

The first person she turns to in Dungatar is her mother, Molly (Davis).  It’s the first time they’ve seen each other since Tilly was sent away as a 10-year-old.  Molly is suffering from dementia but it doesn’t stop Tilly from getting a few things off her chest.  She thinks that she’s cursed.  She thinks that she’s a murderer.  They’re odd statements from someone who comes across as both intelligent and articulate.  Why is she like this?

The rest of the townsfolk are equally eclectic.  There’s a police officer who lives a double life, a hunchback pharmacist who beats women, a paranoid germaphobe who won’t let people into her house, a husband who drugs and rapes his wife, and an abusive schoolteacher with a long held vendetta.  The only “normal” person appears to be Teddy (Hemsworth), the star of the local football team.  He’s keen on Tilly but she refutes his initial advances because of her “curse”.

Don’t let the trailers and adverts fool you.  The Dressmaker is a viciously dark comedy that will catch many by surprise.  Some moments are light and silly whilst other moments are tragic and confronting.  It’s a major reason why writer-director Jocelyn Moorhouse (How To Make An American Quilt) was attracted to Rosalie Ham’s novel.  It’s an emotional rollercoaster where you won’t know what’s around each corner.

With so many characters, it’s a struggle to give enough attention to their respective backstories.  The romance between Tilly and Teddy also feels undercooked.  It’s hard to believe they fall in love with each other so abruptly.  Thankfully, the film finishes on a high with a cracking final scene and a memorable punchline from Kate Winslet.  As someone who doesn’t mind a splash of vengeance, it left me with a wide smile.

Kate Winslet is terrific but it’s Judy Davis who makes the more lasting impression as her cantankerous mother.  She’s both horrible and endearing – a delightful combination.  A win at the upcoming AACTA Awards for best supporting actress feels inevitable.  Two of my favourite Aussie actors, Hugo Weaving and rising star Sarah Snook, also have fun with their respective roles.

Not everything in The Dressmaker works but it takes chances and offers a style comedy that is both dark and unexpected.