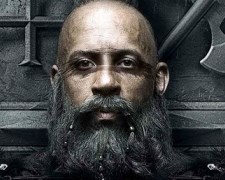 He picked up a few varying roles early in his career (Saving Private Ryan, The Iron Giant, Boiler Room) but for the most part, Vin Diesel’s career has been built around The Fast & The Furious franchise.  Over the last 6 years, he’s only made one live action film that wasn’t part of the Furious series – Riddick in 2013 (and that itself was a sequel).

Diesel is finally stepping into new territory with The Last Witch Hunter but it’s unlikely to rank highly on his resume.  He plays Kaulder (Diesel) – a man who killed one of the world’s most sinister witches.  That was 800 years ago and the reason he’s still alive is that the witch, before meeting her demise, placed a spell on Kaulder giving him eternal life.  Some may see it as a blessing but he sees it as a curse.  He’s tired, rundown and longing to move onto the afterlife.

That’s not to say he’s still not of value to society.  A truce has been in place for centuries that has allowed humans and witches to live side by side.  When a witch gets out of line, Kaulder is brought in as the enforcer to set things straight.  Given that he cannot be killed, it’s a pretty easy gig.  You could shoot him repeatedly in the chest (someone gives it a go) and he’ll still live to kill you.

As we don’t need to worry about the health of our hero, the film tries to become a mystery thriller.  An old priest (Caine) is found dead and Kaulder suspects it wasn’t of natural causes.  His early investigation suggests that witches are involved but he’s not sure about their motivations.  All he has to go by is the strange clue – “remember your death.”  This leads him to Chloe (Leslie), a friendlier witch with the power to open up repressed memories.

The Last Witch Hunter offers little in terms of story and culminates with a tiring, poorly edited action finale.  Vin Diesel goes about his business with the same forlorn expressions and the same monotone voice.  At least the Fast & Furious franchise allows him to explore his comedic side.  This is all too bland, too serious.  The characters needed a significant injection of charisma.

It’s possible to make a great witchcraft movie.  Drag Me To Hell (released in 2009) is a perfect example.  Unfortunately, director Breck Eisner (Sahara) has failed to create something with the same level of depth and suspense.