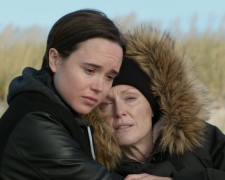 In Spike Jonze’s brilliant 2002 comedy Adaptation, the chief speaker (Brian Cox) at a screenwriting seminar preached about the many stories that exist in the world.  Every day there is genocide, war, corruption and murder.  Every day there is love, heartache, betrayal.  Every day someone makes a conscious decision to destroy someone else.  The bottom line is that if you can’t find a story to write about then you know nothing about life.

The trick is trying to work out exactly which story to tell.  Sometimes we just need a little inspiration.  Man On Wire was a head shaking documentary that chronicled Philippe Petit’s attempts to wire walk between the World Trade Centre Towers in 1974.  It won the Academy Award for best documentary feature in 2009.  Wanting to bring the story to a much wider audience, Robert Zemeckis directed an historical re-telling of Petit’s story (The Walk) that was released in cinemas last month.

The tale of American police officer Laurel Hester has taken a similar path.  In 2007, a 40 minute documentary about Hester premiered at the Sundance Film Festival and it later won the Academy Award for best documentary short subject.  Actor Ellen Page (Juno) saw the film, purchased the rights, started a production company, and recruited writer Ron Nyswaner (Philadelphia) to craft a screenplay.  The finished product, directed by Peter Sollett (Raising Victor Vargas), is now in cinemas.

For most of her life, Laurel Hester was a quiet, unassuming individual.  She studied criminal justice and psychology at college.  She became an investigator for a prosecutor’s office in New Jersey.  She handled cases involving murder, drug trafficking and organised crime.  She was well respected by her peers and reached the rank of lieutenant.

Laurel’s world forever changed in late 2004 when she was diagnosed with lung cancer at the age of 47.  Attempts to destroy the cancer cells using chemotherapy failed and she was given only a few months to live.

At the front of Laurel’s mind throughout the ordeal was her same-sex partner, Stacie Andree.  As a police officer, Laurel was entitled to a pension that would pass to her spouse upon her death.  However, as Laurel and Stacie could not be legally married, that pension would be forfeited.  With her days numbered, Laurel started a battle with the conservative local government and pleaded with them to change the pension regulations.

In the leading roles, Julianne Moore and Ellen Page deliver two terrific performances.  You get a strong sense of the bond and connection that existed between their respective characters.  You also appreciate the difficulties that Laurel faced in trying to manage multiple personas.  While she was a loving, open person at home, she hid her sexuality and relationship status from her homophobic work colleagues so as to help her chances of promotion and avoid discrimination.

The film isn’t as insightful when it comes to the supporting cast.  Steve Carell plays the self-absorbed head of an activist organisation pushing strongly for same sex marriage.  His character highlights that activists, while well intentioned, aren’t always doing what’s best to promote their cause.  It’s an interesting subplot but as it is given such little attention within the film, it ends up being an unnecessary distraction.

Freeheld also struggles to explore the depth of resistance against marriage equality.  On watching the film, you’d think the only people fervently objecting to the issue are the counsellors that sit on the local government.  We observe their meetings and hear a litany of contradictory excuses they use to justify their position.  What we don’t get to see is the pressure placed on them by religious organisations and the large group opposed to same-sex marriage.  Things are not always as simple as they seem.