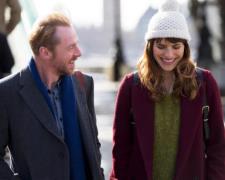 The early scenes of the poorly titled Man Up suggest this is going to be another silly, convoluted, cliché ridden romantic comedy.  When we first meet 34-year-old Nancy (Bell), she’s sitting in a hotel room and ordering burgers via room service.  There’s a party going on downstairs where a good friend has promised to set Nancy up on a blind date.  She’s not interested though.  She sick of dodgy dates and set ups.  She’s happy to keep getting sympathy from friends and family by playing the “forever alone” card.

While on a train to London for her parent’s 40th wedding anniversary, Nancy is befriended by Jessica (Lovibond), a chatty, bubbly, 24-year-old triathlete.  She’s been set up on a blind date by mutual friends and she’s agreed to meet the lucky guy, Jack (Pegg), at Waterloo Station.  They’ve arranged to hold a copy of a bestselling self-help book in their hand to help them identify each other.

It only takes a few minutes for everything to go awry.  Feeling sorry for Nancy and her gloomy, negative attitude, Jessica gives her the self-help book upon leaving the train.  She’s not worried about missing her date though.  She’s going to buy a new copy from the book store at the station.  Unfortunately, it’s not in time before Jack spots Nancy holding the book.  He think that she’s Jessica and stunned by the whole chain of events, Nancy decides to go along with it.  They head into the city for some ten pin bowling, a few drinks, and a lot of awkward first-date conversation.

As bizarre as it sounds, it’s at this point where the film starts to click.  The film doesn’t drag the “will she confess” question out until the later stages.  She admits early on that she’s not Jessica.  Jack doesn’t take the news too well but once he gets over his initial surprise, things settle down and the two decide to have some fun.  There’s a great scene where Jack runs into his ex-wife (Williams) and her new partner in a bar.

Directed by Ben Palmer (The Inbetweeners Movie), Man Up is a film that skilfully balances its genres.  Part of the film is a goofy comedy.  This is evidenced by the scenes with Rory Kinnear.  He plays one of Nancy’s high school “friends” who has never overcome his obsessive crush for her.  Another part of the film is a feel-good drama.  You’ll grow to like Nancy and you’ll see her slowly open up to Jack through the power of intelligent, insightful conversation.

The supporting cast pull their weight.  As Nancy’s father, Ken Scott delivers a sweet, heartfelt speech when talking about his wife at their 40th anniversary celebrations.  I like the nice touch of having separate couches in their home for white wine and red wine drinkers.  Sharon Horgan also impresses as Nancy’s level-headed sister who offers encouragement and helps push her in the right direction.

Clocking in at a neat and tidy 88 minutes, Man Up offers more than you might expect.