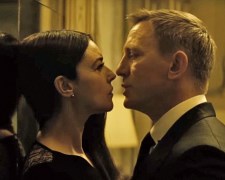 Some films can stand alone but to fully comprehend the premise of Spectre, it will help if you’ve seen the three previous James Bond flicks starring Daniel Craig – Casino Royale, Quantum Of Solace and Skyfall.  There are numerous references to past events, past villains and past loves.  It has the feel of a concluding finale but we all know that Bond will be refreshed and rebooted until the series becomes unprofitable.

As if inspired by Alejandro G. Iñárritu’s Oscar winning Birdman, director Sam Mendes (American Beauty) begins with a lengthy continuous shot through the main square in Mexico City.  Thousands have taken to the streets to celebrate the Day of the Dead.  Bond has told MI6 that he’s on holidays but the trip has a dual purpose.  He’s been tipped off about a known terrorist who is planning an imminent attack.  Suffice to say he gets his man after an elaborate, suspenseful chase.

The dust settles (while we sit through the traditional opening credits) and Bond learns that despite saving countless lives, there will be ramifications.  His actions in Mexico were unauthorised and the new head of the Joint Intelligence Service (Bautista), following the merger of MI5 and MI6, is using it as justification to phase out the ‘00’ program.  They’d rather gather evidence through more modern techniques such as drones, internet monitoring, and cross-country collaboration.  The days of the secret agent are done.

Grounded by M (Fiennes) and instructed not to leave London, Bond could have obeyed and watched Seinfeld re-runs on his couch.  Okay, so it’s not his style.  While Bond has killed his fair share of villains and henchmen, there appears to be a secretive terrorist organisation that links many of them together.  The search for its leader (Waltz) takes him to Rome, Morocco and the Austrian Alps.  Keeping away from the watchful eyes of MI6, he is assisted by a young psychologist (Seydoux) who has her own reasons for getting involved.

After going down a darker, creative path in Skyfall, the writers have gone with a more conventional screenplay for Spectre.  People are left for dead and then mysteriously re-appear later in the movie.  Bad guys waste time explaining their heinous plans before giving the good guys a chance to escape.  Hackers crack sophisticated computer systems in a matter of minutes.  There’s even a bomb complete with a countdown clock.  It’s too familiar.

Christoph Waltz (Django Unchained) also fails to impress as the film’s keynote villain.  Keeping him in the shadows (literally) during the first two-thirds creates an aura of mystery but when all is revealed during the climax, his motives feel contrived and his clumsy operations don’t make much sense.

Despite its limitations, Spectre is still to be admired for Mendes’ skilful direction and the striking visuals of Dutch cinematographer Hoyte van Hoytema (Her, Interstellar).  There’s a beautiful scene where Bond kills two hitmen at the home of a key witness (Bellucci).  The camera remains fixed on Belucci’s frightened face while the shooting takes place in the out-of-focus background.  It provides a different perspective on a common action sequence.

The affable cast also give the film a boost.  There’s a great conversation aboard a train between Léa Seydoux (Blue Is The Warmest Colour) and Daniel Craig where she asks about his longevity and his post-retirement plans.  Ralph Fiennes slips comfortably in into the seat of M and while the film is light on laughs, he earns the best of the one-liners while talking to his counterpart, C.  Ben Wishaw gets to step out from his behind his desk and participate in the mayhem.

Struggling to sell its important messages about corruption within the intelligence world, Spectre is a chaotic Bond film that doesn’t quite come together.