Review: He Named Me Malala 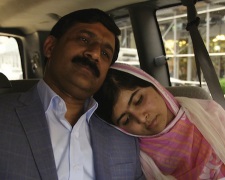 If someone told me that the life of a teenager was being covered in a feature length documentary, I’d immediately think they were a musician with a horde of adoring fans.  That was the case with Justin Bieber’s Never Say Never in 2011 and One Direction: This Is Us in 2013.

For his latest documentary, Oscar winning filmmaker Davis Guggenheim (An Inconvenient Truth, Waiting For Superman) is taking us inside the world of a very different 18-year-old.  Malala Yousafzai was born in Pakistan, survived an assassination attempt by the Taliban, and became the youngest ever recipient of the Nobel Peace Prize.  She currently lives in England with her parents and two siblings.

With limited footage to utilise, Guggenheim tells key chunks of Malala’s story by using simple animation.  Her father was a school teacher in Northern Pakistan and unlike many other girls from the area, Malala was given access to a good education.  When the leaders of the Pakistani Taliban decreed that women should not have a right to education, Malala found the courage to speak out.  She wrote an anonymous blog for the BBC World Service and she was interviewed by news outlets across the globe.

Her notoriety grew and the Taliban identified her as a threat.  In October 2012, Malala and two friends were shot on a bus while heading home after a school exam.  The bullet went through her head but she miraculously survived after receiving medical treatment in Pakistan, Germany and England.  The film opens with a moving interview where Malala describes her feelings when she first woke from a week-long coma.

Guggenheim’s film appears to have two purposes.  Firstly, it is raising awareness about the power of the Taliban and their efforts to supress women’s rights.  More than 400 schools in Pakistan were bombed for teaching young girls.  The photos and videos used the movie help illustrate this alarming statistic.

Secondly, the film is trying to show that Malala is just like so many other young women.  We see her fighting with her older brother, struggling to pass her high school exams, and fawning over photos of cricketers such as Shane Watson and Shahid Afridi.   She also has a head-scratching yet inspiring ability to forgive all those who have harmed her.  To borrow a familiar phrase, she’s an old head on young shoulders.

That’s not to say she lives an ordinary life.  Malala is now a recognisable activist and published author who has had the chance to meet world leaders including The Queen and President Obama.  She continues to use her influence to push for female equality when it comes to education.  Not everyone is a fan and the film includes a few vox pop interviews from Pakistanis who are resistant to her views.

I’d have preferred a little more attention be given to her causes rather than Malala herself but Guggenheim’s film highlights that education is an invaluable tool that all deserve access to.