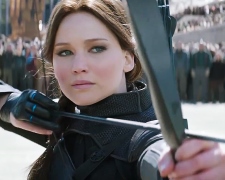 If you haven’t seen the earlier films in this franchise, take your money and buy a ticket to something else.  There’s no “previously on the Hunger Games” introduction to help get you up to speed.  You’ll be struggling to understand each character’s history and motivations.

For everyone else, there’s not much I can say that would prevent you from seeing this final instalment.  The first two films were great.  They offered plenty of action and explored an intriguing concept.  The third flick meandered along but set the stage for what would hopefully be a big conclusion.

The Hunger Games: Mockingjay – Part 2 isn’t offering much in terms of new storylines.  Katniss Everdeen (Lawrence) is still a reluctant hero in a war being raged between the slaves in the poor districts and the domineering bureaucrats in the wealthy capital.  Many of her family and friends have been killed and she has but one thought in mind – putting an arrow through the heart of the evil President Snow (Sutherland).

As much as she’d like to, Katniss can’t do this alone.  The Capital is heavily fortified with Snow using his expansive army as protection.  She turns to a few familiar faces to help get the job done.  They include her two love interests, Peeta (Hutcherson) and Gale (Hemsworth), as well as a group of well-trained soldiers with valuable intelligence.

There’s some interesting stuff here.  What happens if you kill a villainous dictator?  Does the world instantly become a better place?  Or do you just create more turmoil as its citizens fight for power and leadership?  It’s reminiscent of the toppling of Iraq’s leader, Saddam Hussein, in 2003.  The film also debates the rules of war.  Is it worth sacrificing civilian casualties in pursuit of a greater good?  Should you be allowed to “fight dirty” if there is no other alternative?

These questions are asked but the screenplay is unwilling to provide meaningful answers.  Characters go from good guys to bad guys without ever really getting to the heart of their transformation.  Were they misguided fools or was there something more sinister at play?  I’m not sure.  The film has also suffered from the death of actor Philip Seymour Hoffman.  His character is missing during several key moments and script re-writes have done little to compensate.

The action sequences are also a letdown.  There are several interesting set-ups (such as a moment involving mutated humans in an underground tunnel) but these scenes have been edited in a haphazard manner.  It’s hard to see who’s fighting who and it lessens the suspense.  The biggest surprise is the unusual climax.  Without given too much away, the film skips an important chunk and then wastes time with a drawn out, melodramatic finale.  Did we really need that final minute for example?

I remember struggling with Suzanne Collins' final book.  It didn’t have the same sense of urgency and excitement.  My thoughts on this movie are essentially the same.