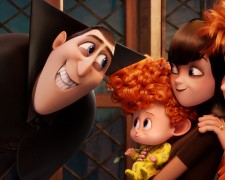 Released back in September 2012, Hotel Transylvania opened in top spot on the box-office chart in the United States, it grossed more than $350m at the international box-office, and it earned a nomination for best animated feature at the Golden Globes (it missed out on an Oscar nom).  An inevitable sequel was ordered and it has now been delivered thanks to director Genndy Tartakovsky.

In the original film, Count Dracula (Sandler) was the overbearing father who tried to prevent his vampire daughter from falling in love with a human.  It took a while but he learned the error of his ways.  Hotel Transylvania 2 takes us a few years into the future where Mavis (Gomez) and Johnny (Samberg) are now married with a young son, Dennis.

So what kind of offspring do you get when a human mates with a vampire?  That’s ultimately the crux of this sequel.  Dracula is hoping his grandson is a vampire.  He wants to take Dennis under his wing and show him how to fly.  Mavis and Johnny aren’t too fussed.  They love their son regardless of how he turns out.

With Dennis nearing his 5th birthday, Dracula is starting to sweat.  His grandson is yet to “grow his fangs” and has given no indication that he’s actually a vampire.  His friends offer reassurance and suggest that Dennis is just a late bloomer but Dracula isn’t sure.  He convinces his daughter to take a well-earned holiday in California and while she’s gone, he puts Dennis through a series of tests to prove that he’s a vampire worthy to follow in his footsteps.  Suffice to say that it doesn’t go as planned.

Having already made more money than the original, Hotel Transylvania 2 shows that there’s plenty of life in these dead characters.  It has an expansive cast of voices who have all returned for this sequel – Adam Sandler, Andy Samberg, Selena Gomez, Kevin James, David Spade, Steve Buscemi, Molly Shannon and Fran Drescher.  A new addition is the legendary Mel Brooks who appears late in the film as Dracula’s cantankerous father.

There’s a charm to these characters and it’s easy to see why kids are attracted to the story.  It’s set in a fun, non-threatening place where humans and monsters switch between their respective worlds.  Molly visits a regular convenience store in California and tries a slushy for the first time.  It’s a cute moment.  On the flip side, Johnny’s parents visit Hotel Transylvania and try their best to fit in amongst a variety of monsters.

It’s a notch below its predecessor but with school holidays about to kick off in Australia, this will be the obvious choice for young kids in the lead up to Christmas.