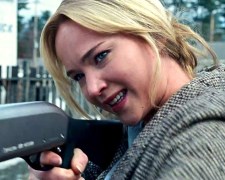 Written and directed by David O. Russell (Silver Linings Playbook), this is an underdog story of epic proportions.  Joy Mangano (Lawrence) is a young woman in desperate need of a good break.  She works as an airline ticket clerk and has just learned that her shifts are being cut.  She is divorced with two children and is struggling to pay the household bills.  She is concerned about her depressed mother (Madsen) who lies in bed watching soapies all day.  She is frustrated by her selfish father (DeNiro) and opinionated sister (Röhm) who question every choice she makes.

Joy wants to break away from the shackles of her family’s negativity.  Since she was a young child, she has always enjoyed investing and creating products that could change the world.  Her ideas have never been financially successful but it hasn’t stopped her from trying.  The only person offering support is her beloved grandmother (Ladd) who continually reassures Joy that she’s special and that things will work out in the long run.

Worried that end up like the rest of her family, Joy puts crayon to paper and comes up with a invention – an affordable, long-life, self-ringing mop that would make life much simpler for the user.  It’s an idea with potential but to get it off the ground she’ll need help from two key people – her father’s wealthy girlfriend (Rossellini) who will put up the finance and a television executive at the Home Shopping Network (Cooper) who will help with promotion.

Based on a true story, Joy is part fairy-tale, part reality.  In the same way that Cinderella was helped by the Fairy Godmother, it does feel like there’s a higher power guiding Joy.  The positive sentiments and Nostradamus-like predictions offered by grandmother are proof of that.  That doesn’t mean she can sit back and let it all happen magically.  There’s no handsome prince here.  Joy will have to take chances and fight with every ounce of energy she has to “make it” in a male-dominated business world.

The different style that Russell has brought to Joy doesn’t always work.  It’s too obvious as he lays the foundation for the now predictable subplots that will be explored in the later stages.  For example, there’s a moment when Joy ignores the suggestion of her ex-husband (Ramírez) that she get legal advice around the product patent.  There’s another scene where Bradley Cooper’s character asks that they remain friends if they ever become business adversaries.  All that’s missing is a wink between the two.

The film’s strengths are derived from the performances.  Jennifer Lawrence is terrific as the determined yet vulnerable heroine.  She keeps getting knocked down and she keeps getting back up.  It’s inspiring if nothing else.  You’ll grow to hate many of the supporting characters but that’s also a good thing.  Those who believe in karma will enjoy seeing them get what they deserve.

It’s not David O. Russell’s best feature (that would be The Fighter) but at least it makes more sense that his most recent outing, American Hustle.