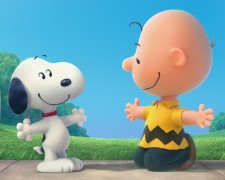 Much has been said and written about Star Wars over the past few weeks.  Disney purchased the rights to the franchise in 2012 (by acquiring Lucasfilm) for just over $4 billion USD.  It may sound like an obscene sum of money but given the box-office success of The Force Awakens, it shouldn’t take long for that investment to be recouped.

It wasn’t as widely publicised but the Iconix Brand Group took a similar path with Peanuts.  They purchased the rights to Charles Schulz’s famed comic strip in 2010 for $175 million USD.  The Peanuts characters can be found in television ads, greeting cards, and toy stores but their popularity has waned in recent years.  Iconix wanted to make more from their investment and so a new Peanuts movie was put into production – the first to be played in cinemas for 35 years.

They should be happy with the finished product.  Snoopy & Charlie Brown: The Peanuts Movie has made $127 million at the U.S. box-office thus far and is touted as a likely Oscar nominee in the best animated feature category.  Just as pleased will be Craig and Brian Schulz, the son and grandson of the late Charles Schulz (who passed away in 2000).  They spent several years writing the screenplay, along with Cornelius Uliano, and ensured the film remained faithful to the comic strip adored by readers for half a century.

Packaged into a nicely-paced 88 minutes, The Peanuts Movie has two storylines running concurrently.  The more prominent narrative sees Charlie Brown on a quest to win the affections of the Little Red-Haired Girl.  It’s not easy given his shy, insecure disposition and his uncanny knack for causing mayhem.  The other subplot is more “action packed” and chronicles Snoopy’s attempts to rescue his beloved Fifi who has been kidnapped by the Red Baron.

Those new to the Peanuts may battle with the abundance of characters (it’d be like watching a Simpsons episode for the first time) but the film is still easy to like.  Kids will be able to follow the simple storyline and will enjoy the misadventures of the good-natured, well-intentioned Charlie Brown.  It’s also nice to see an animated feature without a crazy, over-the-top villain.

Older audiences will chuckle at some of the film’s finer details.  There are a few adult references as well as throwbacks to Schulz’s black and white comic strips.  The animation is superb with director Steve Martino (Ice Age: Continental Drift) creating 3D computer animation that still looks like it’s been hand drawn.  It’s another tribute to the comics and you’ll notice the characters don’t move as fluidly as in other animated films.  Martino has also used the iconic jazz piano composition “Linus & Lucy” numerous times as part of the soundtrack.

Snoopy & Charlie Brown: The Peanuts Movie is the pick of the family fare over the Christmas school holidays.