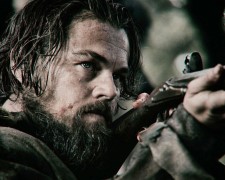 Two of my favourite animates features of 2015 were The Good Dinosaur and Shaun the Sheep Movie.  A distinguishing feature is that both relied on minimal dialogue.  They used facial expressions and other visual triggers to tell their stories and generate an emotional response.  An added bonus is that they could be screened in non-English language countries with minimal subtitles.

The Revenant feels like the adult equivalent.  Set in the early 19th century, the film opens with a team of American explorers trekking through a remote forest and hunting animals for their fur.  They are forced to flee after being attacked by a well-armed group of Native-Americans.  It’s a brutal sequence and the body count is high.

The survivors embark on a long journey home and are guided by Hugh Glass (DiCaprio), an experienced frontiersman.  That is until Glass is savaged by a bear while scouting ahead.  It’s all over in the space of a minute but it’s an intense scene that is tough to watch.  The special effects are seamless and it’s hard to believe that DiCaprio is still alive by the end of it.

His fellow explorers try to stretcher the comatose Glass back to their base but the terrain is too mountainous and his wounds are too severe.  Team leader Andrew Henry (Gleeson) offers extra cash to those willing to stay behind and monitor Glass while the others forge ahead in search of help.  Those selected are John Fitzgerald (Hardy), a man with a shady past, and Jim Bridger (Poulter), a naïve hunter on one of his first expeditions.  Also staying back is Glass’s teenage son.

It’s at this moment when Fitzgerald shows his true colours.  While Bridger goes in search of food and water, Fitzgerald kills the son and leaves Glass for dead.  He fabricates a story about another Native-American attack to throw Bridger off the scent and the two start heading home.

Beware the man with nothing to lose.  It’s a theme that has been explored in numerous films.  Liam Neeson and the Taken action franchise springs to mind.  Glass miraculously survives his wounds and slowly gets back his strength and ability to walk.  He is motivated by one of life’s most common desires – revenge.  His only thought is to hunt Fitzgerald and make him pay.

After winning the Academy Award last year for Birdman, The Revenant marks the next achievement for Mexican director Alejandro González Iñárritu (21 Grams, Babel).  It’s a hugely ambitious project that cost roughly $135 million (twice the initial budget) and took almost a year to shoot.  A contributing factor was the insistence of cinematographer Emmanuel Lubezki (Gravity) to only use natural light during the production.  That meant that, on average, only a two-hour window with ideal light was available each day.

Leonardo DiCaprio is currently the frontrunner to take home the best actor prize at the Academy Awards next month.  One reason is because of his terrific performance.  Another reason is because he’s overdue having been nominated 4 times previously without success in the acting categories.  He hardly says a word during the film but you get a clear sense of his character’s pain and determination.  From swimming in frozen rivers to eating a raw bison liver, DiCaprio has described it as “the hardest film he’s ever done.”

The Revenant is a beautiful film.  There’s no argument about that.  Lubezki’s cinematography is gorgeous and the sound team have done an amazing job capturing the noises from such an isolated location.  The howling winds will stick in your head.

I was hoping for more from the story though.  It’s scant on background information when it comes to the characters.  It also struggles when it moves away from the main narrative.  For example, the leader of a Native-American tribe is trying to track down his kidnapped daughter.  Only a small amount of time is devoted to this key subplot which makes it difficult to follow and appreciate.

More likely to be remembered for DiCaprio’s performance than its slow-paced, grim narrative, The Revenant is an endurance test for both its leading character and the audience.