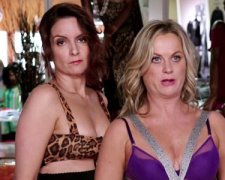 There’s a bit of fluff on either side but Sisters is centred on an epic party thrown by two middle-aged siblings.  Their motivations are a mix of nostalgia and self-interest.  It’s the last night they’ll spend in their childhood home which, having been held in the family for decades, is being sold by their parents to a smug young couple.  It’s also a chance to have a good time and forget about their deep-seeded troubles.

Writer Paula Pell (who has a background on Saturday Night Live) is trying to tap into the success of other great party movies such as Superbad, Project X, Animal House and Old School.  Most invitees are neurotic.  There’s a nonchalant dealer carrying every drug imaginable, a liquor store owner looking to get laid, a group of rebellious beauticians being employed as slave labour, a couple addicted to having sex in public, a nerd who thinks all his jokes are funny (they’re not), and a pretentious woman with a major grudge against the party’s hosts.

As you’d expect, it becomes increasingly outrageous with each passing scene.  For the most part, the characters are trying to win laughs through silly, immature dialogue.  They talk a lot but it’s not particularly profound or amusing.  That said, there are unexpected flashes of humour that do surprise.  A conversation shared between a flirting Tina Fey and a monotone John Cena is a major highlight.  A bedroom scene involving Amy Poehler and Ike Barinholtz also wins big points.

There’s a darker undertone to the story that is touched upon but not given the gravitas it requires.  Both of the party’s hosts, Kate (Fey) and Maura (Poehler), have got issues.  The self-centred Kate can’t hold down a job because she’s incapable of showing respect and consideration to others (evidenced in the film’s opening scene).  She’s about to be kicked out of her home, she cares little for her parents, and she has a strained relationship with her only daughter.  Maura’s problems aren’t as serious but her worrying, overly-cautious personality is clearly impeding her ability to find happiness in life.

Their issues come to the surface during the party but it’s hard to buy into the resolution given the film’s light nature.  It lacks the realism and complexity that we saw from Amy Schumer in Trainwreck, a superior comedy about an insecure woman getting her life on track.  Perhaps Pell should have ditched the characters’ troubled backgrounds and stuck with carefree, cringe-worthy material all the way through.

Tina Fey and Amy Poehler are two long-time friends who should work well off each other.  You only have to watch their opening monologues at the last three Golden Globe Awards to get a sense of that.  They’re giving it their best shot in Sisters but it feels like a missed opportunity to create something with a bigger heart.