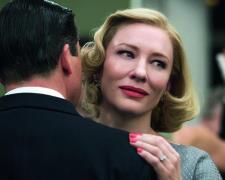 There’s a natural pressure when a screenwriter tries to adapt one of their favourite novels into movie form.  They want to take their love for the story and impart similar feelings on a new, wider audience.  It was a challenge faced by Phyllis Nagy who had an extra burden to carry with The Price of Salt (later renamed Carol).  Not just a fan of the book, Nagy was a close friend of author Patricia Highsmith (The Talented Mr. Ripley) up until her death in 1995.  She wanted to make something great to honour her memory.

Set in 1952, the early scenes are told from the perspective of twenty-something Therese Belivet (Mara), a shy woman who works in the toy section of a large department store.  It is there where she meets Carol Aird (Blanchett), an impeccably dressed mother looking to buy a Christmas present for her young daughter.  They share a simple conversation and Carol makes a purchase.  Their encounter is over in a matter of minutes.

It’s not until just after that Therese notices the gloves left by Carol on the counter.  She gets her address from the order docket, wraps the gloves, and puts them in the mail.  You should already be thinking by this point.  Is Therese just being a nice person or is she using this as a means to interact again?  What about Carol’s perspective?  Did she leave the gloves deliberately or was it just a forgetful moment?

Carol is quick to make the first few moves.  She invites Therese out for lunch and then asks her to visit her country home.  The naive Therese keeps saying “yes” but she’s not entirely sure where it’s leading.  It takes a little time but she finally harnesses the courage and starts probing for information – “I want to ask you things but I’m not sure if you want me to.”

It’s clear these two want to spend time together but those around them are intent on pulling them apart.  Carol has filed for divorce from her husband, Harge (Chandler), but he’s not so keen to let go.  He’s prepared to smear his wife’s name and rely on a “morality clause” to obtain full custody of their only child.  As this goes on, Therese is being pursued by multiple guys who mistakenly believe she is timid as opposed to uninterested.

Carol is a beautifully shot film that captures the mix of nervousness and excitement that comes with most new relationships.  The fact that it involves a same-sex couple in the 1950s adds to the complexity.  It was time when lesbians felt pressure from friends and family to “conform” and marry a man.  A homosexual herself, Highsmith drew on her own experiences and feelings in writing the novel.

Nagy and director Todd Haynes (Far From Heaven) deserve praise for the style they’ve brought to the material.  As a homage to David Lean’s 1945 classic Brief Encounter, the film is bookended by a scene in a restaurant where Carol and Therese are interrupted at an inopportune time.  This passage also highlights an important detail.  As the power in the relationship shifts from Carol to Therese, the film’s focus shifts from Therese to Carol.

Both Cate Blanchett (Blue Jasmine) and Rooney Mara (The Girl with the Dragon Tattoo) deliver sublime performances with each on track for another Academy Award nomination.  Mara won the best actress prize at the 2015 Cannes Film Festival where the film had its world premiere.  Costume designer Sandy Powell (Shakespeare in Love) and the talented make-up and hair styling team also deserve praise in helping capture the era.

It took close to twenty years to get Carol made but the wait has been worth it.