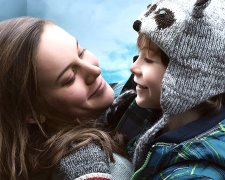 When trying to describe this storyline to a friend, the first adjective that came to mind was “unimaginable”.  That doesn’t really fit though.  The fact that audiences can “imagine” themselves in the same situation is what makes it so terrifying.  It is a work of fiction based on the novel by Emma Donoghue but we know that such events have occurred before.

The first half of the film is set entirely in a soundproof room that is roughly 3 metres by 3 metres.  It’s where Joy Newsome (Larson) has spent the last 7 years of her life.  She was kidnapped as a 17-year-old and has been held captive by a man who has never revealed his name (Nick).  He provides her with meagre amounts of food and rapes her on a daily basis.

It’s obvious from her body language that Joy is a defeated woman.  She’s given up hope of rescue and her feeble escape plans have amounted to nothing.  The only thing that keeps her going is her 5-year-old son, Jack (Tremblay).  He was born in the tiny room and has no idea of the expansive world that exists outside its walls.

It’s hard to envisage any child turning out “normal” from such an ordeal but the catch is that Jack doesn’t know any different.  For years, his mother has told him that “room” is all that exists in the world.  The dogs and squirrels they see in shows on their rundown television are all make believe.  Joy has fed these stories to her curious son to help protect him.  He’s not yet ready to deal with the reality of their situation.

The trailer gives it away and so I’m not revealing too much when I say they eventually make it outside of their room.  The escape offers the film’s most intense sequence.  What follows are their troubled attempts to adjust to a completely new life.  Jack has few social skills and has been taken completely out of his comfort zone.  Joy is still traumatised and is struggling to fit back into a world that believed she was dead.

Winner of the coveted People’s Choice Award at the 2015 Toronto Film Festival, Room is both horrifying and inspiring.  It shows us the best and worst of the human condition.  In their respective leading roles, Brie Larson (Short Term 12) and newcomer Jacob Tremblay have created a powerful, credible bond.  Larson is the short priced favourite to win the best actress Oscar next month and you’ll feel a huge amount of empathy for both characters.

My only problem with the film was that it’s told largely from the perspective of Jack.  He provides the narration and it’s through his downward looking eyes that we see events unfold.  This works within the room but in the outside world, it feels limiting.  Joy’s continual disintegration becomes the more interesting subplot but she slips from view in the later stages.  A moment where she is interrogated by a television reporter never rings true.

Nominated for 4 Academy Awards including best picture and best director, Room hits most of its marks.