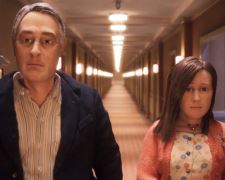 If you’re an adult going along to see an animated movie, it’s more than likely that you’ll be taking your kids along too.  That’s because the overwhelming majority of animated features are pitched at family audiences.  They’re light, they offer plenty of humour, and they include an array of cute, loveable characters.

Charlie Kaufman is no ordinary filmmaker and it’s no surprise that his foray into the animated genre doesn’t follow the aforementioned rules.  He’s the man behind some of cinema’s most creative screenplays – Being John Malkovich, Adaptation and Eternal Sunshine of the Spotless Mind.  The later won him an Academy Award in 2005.

Anomalisa began its life as a “sound play” back in 2005.  Kaufman teamed up with music composer Carter Burwell to create a different theatrical experience.  Performed in front of live audiences, the actors sat on stage and simply read their scripts.  There were no sets, no costumes, and no character movements.  Burwell wanted patrons to simply close their eyes and picture the story in their own way.  Recordings were later released online for wider audiences to enjoy.

It wasn’t until several years later that Kaufman met director Duke Johnson and they began work on a movie version using stop-motion animation.  Let be clear that this isn’t a movie for kids.  It is a layered drama centred around 24 hours in the life of Michael Stone (Thewlis), an acclaimed writer who is attending a conference in Cincinnati to promote his latest book on customer service.  Michael is a big deal.  There’s a brief scene where guests stop, stare and whisper as he walks through the lobby of his hotel.

Michael’s success has done little for his dwindling self-confidence.  The word is never used but a strong argument could be made that he’s suffering from depression.  Nothing seems to make him happy.  He calls his wife and son to say that he’s arrived safely at the hotel but you can tell from the sound of his voice that it feels like an unnecessary chore.  He’s just as disinterested when making small talk with an inquisitive taxi driver.

His evening is given an unexpected jolt when he meets Lisa (Leigh), an adoring fan who is staying at the hotel.  They have a few too many drinks and wind up back at his room for a romantic encounter.  I’m not sure I’ve seen a stop-motion sex scene before so it’s another thing to tick off my cinema bucket list.  It also explains the film’s MA rating in Australia.  The Classification Board must have given it a little extra thought compared to your average movie.

A curious touch to Anomalisa is that aside from the two leads, every other character has the same face and the same voice (Noonan).  It’s an interesting creative choice but it helps us get inside Michael’s head – he sees the world has a tired, disappointing place where everything feels the same and nothing provides him with satisfaction.  That’s my interpretation anyway.  Kaufman has been deliberately coy while on the interview circuit.  He’ll talk about the production process but wants audiences to reach their own conclusions about these characters and the film’s messages.

It’s a simple story on paper but Anomalisa is a great conversation generator.  I’m still reflecting on its style and themes.  It took home the Grand Jury Prize from the Venice Film Festival and recently earned an Academy Award nomination for best animated feature.  As one of the year’s most original movies, you can add my name to its growing list of fans.