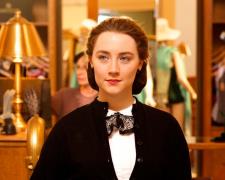 Brooklyn is a beautifully told story.  It begins in 1952 and introduces us to Eilis Lacey (Ronan), a young woman from a small Irish town who lives with her mother (Brennan) and older sister, Rose (Glascott).  It’s a place that doesn’t offer a lot of career options but Eilis seems content.  She has a part time job in a convenience store and a nice set of friends she hangs out with regularly.

Determined to see her sister make something more of her life, Rose pressures Eilis into immigrating to the United States.  She has been in touch with a Catholic priest (Broadbent) and has arranged for Eilis to live in a boarding house in Brooklyn, New York under the watchful eye of its no-nonsense landlady (Walters).

It’s a difficult period for the shy, quiet Eilis.  It’s a particularly sad moment as she makes the long voyage by ship.  She is going from a tiny town where she knows everyone… to a giant city across the Atlantic Ocean where she knows no one.  She’s instantly homesick and letters from back home do little to help.  Rose tells Eilis that “even if your letters were 200 pages they still wouldn’t be long enough for your mother.”

It takes a little time but Eilis slowly forges a way through the melancholy.  She finds work as a clerk in a posh convenience store and develops a rapport with the customers.  She starts taking accounting classes at night with the hope of moving into the business world.  She makes new friends and immerses herself in the American-Irish culture.  She meets a young Italian plumber, Tony (Cohen), who is determined to win her affections.

Fate then throws a curveball in Eilis’s direction.  An unexpected event forces her to return to Ireland for a brief period and while there, she faces increasing pressure to make her stay permanent.  A company offers well-paid work as a bookkeeper and she is pursued by a well-to-do suitor, Jim (Gleeson).  Provided with two viable choices, Eilis now must make the toughest of decisions – where does she want to spend the rest of her life and who does she want to spend it with?

Based on the 2009 novel by Colm Tóibín and adapted for the screen by Nick Hornby (About A Boy), Brooklyn’s characters are honest and genuine.  This is particularly evident when exploring Eilis’s romantic dilemma.  In most Hollywood movies, one guy turns out to be a jerk/problem and the choice becomes obvious.  That’s seldom the case in reality and there’s no “villain” here.  Tony and Jim are both terrific people and it’s easy to see why Eilis’s heart is so torn.

After her breakout performance in Joe Wright’s Atonement (which earned her an Academy Award nomination in 2008), Saoirse Ronan has put together a strong resume working alongside directors such as Peter Jackson, Gillian Armstrong, Peter Weir, Neil Jordan and Wes Anderson.  She is truly outstanding in Brooklyn.  Eilis is not a hugely talkative character but you’ll feel all of her emotions.  It ties into a recent comment made by director John Crowley (Boy A, Closed Circuit) that “there’s nothing more beautiful than a close-up of a face changing its mind.”

The superb supporting cast is headlined by the relatively unknown Emory Cohen (The Place Beyond The Pines).  He shares some charmingly awkward moments with Ronan as their newfound romance takes shape.  They provide the film’s best scenes.  Jane Brennan adds sentimentality as Eilis’s brooding mother and Julie Walters (Billy Elliot) provides several good laughs as the sharp-witted head of the religious boarding house.

Brooklyn is a sweet, moving, gorgeously-shot tale about a woman trying to find where she belongs.  If I see a better film this year, I'll be surprised.